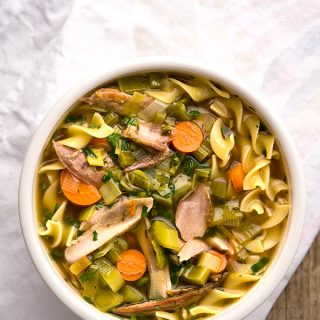 Life is a series of hits and misses, ups and downs.

Hunting, as anyone who has ever done it knows, is an imperfect art. A pheasant, in an ideal world, should be shot cleanly in the head. A quick death, no meat loss. This, sadly, is the exception rather than the rule. All of us have, well, “pillowed” a rooster or two, catching the bird in the full pattern of pellets. It is disappointing. No roast pheasant with this rooster.

So what to do? Make pheasant soup.

Pheasant soup is, essentially, chicken soup, only with a wild ditch chicken instead of a yardbird. It is equally satisfying to body and soul, a tonic for your down days, or days when the icy chill of the world — whether emotional or physical — has cut a bit too deep. My recipe is one hardwired within me, a soup I have enjoyed virtually unchanged since I could remember being me.

I came by these pheasants as a gift; my friends Cory and Bryce had arrived from Utah bearing dead pheasants. We were headed out on a duck hunt the following day, so they skinned the birds and I set them in the fridge for later.

Cory and Bryce returned home, and Sunday came. It was a chilly day that became a day of disappointment. A powerful storm blew through the area, promising a rain of ducks in our blind. It did not happen. A mallard and a spoonie were all we had to show for hours of being soaked in the elements. Oh well. Such is hunting.

Back home, I turned to make this soup without conscious thought. Roast the carcasses of the pheasants with a little oil and salt, make a broth from them. Pick off the meat, strain the broth and add new vegetables, a little wine, and the obligatory egg noodles.

Chicken noodle soup must always have egg noodles, or at least mine must. I’ve eaten it this way for more than 40 years, and I am not about to change now. You might prefer rice, or orzo, or something else — and that is OK by me.

Next time you have an ahem, “well shot” pheasant, or grouse or even a turkey, make this soup. Make it for your down days, make it for your children. Watch them wrap their hands around the bowl and inhale the gift you have given them. Watch them eat one bowl, two. Three. Watch them file away this moment forever. And smile. 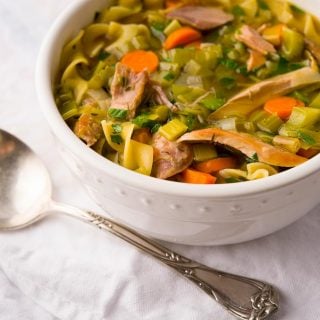 This is my rendition of pheasant noodle soup. Everyone who makes this probably does something a little different. If you are short of pheasants, use any white meat. Turkey, rabbit, grouse, partridge or quail all spring to mind. You could even make this with fish if you were so inclined, but if you do, don't cook the broth more than 1 hour. Everything else is pretty easy to find. For me, this is a winter warmer, something to eat for lunch on a cold day. For a dinner, you might need only some bread and a salad to go with it.
Prep Time3 hrs
Cook Time30 mins
Total Time3 hrs 30 mins
Course: Soup
Cuisine: American
Servings: 8 people
Calories: 918kcal
Author: Hank Shaw

Note that prep time assumes you are making broth. Once made, the broth will keep a week in the fridge. If you want to have leftover soup ready to go, undercook the noodles so they are al dente when you first eat the soup. They'll absorb more broth in the fridge and still be nice a few days later.