This dish is a bit fancy, but it is worth the effort to make this sauce, which I more or less recreated from Thomas Keller’s The French Laundry Cookbook

. It’s a versatile sauce that’s pure parsley, with a hit of garlic to make what might otherwise be an austere sauce a little more homey.

It’s good with white meats and fish, and the color is so vivid it almost looks like paint. In a good way.

Pheasant breasts, as well as the breasts of quail, turkey, partridges and good chickens should all be served at a solid medium. So should the saddle of a rabbit.

I know this runs counter to what many people think. But seriously, you want the center to be no hotter than 155°F after resting, and even 145° after resting is fine; the pheasant in the picture was seared to 140°F and then rested for 5 minutes.

The visual key is a blush of pink. If you do this, you will be rewarded with the most tender pheasant you’ve ever eaten. Follow my searing instructions below and you won’t be sad.

I like to make the parsley sauce the star here, so I don’t clutter up the plate with too many other flavors. Mashed potatoes is your ideal easy side dish, but a simple risotto made with pheasant broth from the carcasses of your birds is even better. Regular rice is OK, too. 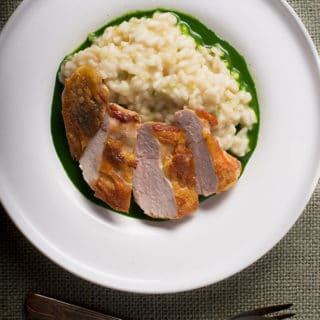 This sauce requires a little work, but you will be rewarded with a stunning sauce that's probably not like anything else you've ever eaten. Once you make it, you can use the technique for lots of other herbs, such as basil, tarragon, cilantro, young oregano and marjoram. The searing technique in this recipe is a little unorthodox, but if you let the pheasant come to room temperature before you start it works well. The result is perfectly tender pheasant with just a blush of pink in the center, topped with skin so crispy it's like a cracker.
Prep Time30 mins
Cook Time15 mins
Total Time45 mins
Course: Main Course
Cuisine: American
Servings: 4 people
Calories: 261kcal
Author: Hank Shaw