Mussel soup, Italian style, is a sort of a hybrid between a pasta sauce and a soup, and really can go either way. As a soup, you need some crusty bread to sop up the briny tomato sauce, or you could drop in some small pasta shapes, such as elbows or orzo, and get the same effect.

I developed this recipe from one I found in Marcella Hazan’s classic, Essentials of Classic Italian Cooking.

The question of removing shells from a mussel soup is up to you. They’re pretty in the bowl, but if you are gathering your own mussels, you are very likely to get gritty bits because mussels get hitchhikers on them that fall off during cooking. This is not normally a problem with farmed, supermarket mussels.

Many times I will remove most of all of the shells from my shellfish soups, which makes them easier to eat. A happy compromise is to keep a few nice ones for show.

It is a very simple mussel soup: Steam the mussels open, use the broth for the soup, strained of any grit. Add tomatoes, garlic, olive oil and cilantro or parsley. Maybe drizzle some balsamic vinegar over at the end. Easy-peasy.

I prefer this soup chunky, but if you want you can puree everything, or everything except for the mussels. If you have cherry tomatoes, add a few in because they look cool.

You can substitute oysters or clams for the mussels, if you want. Or, if you have mussels and want to take your soup another way, try this Sardinian shellfish soup.

Another cool option would be to throw in some smoked mussels at the last minute — they’re already cooked so just need to be heated up.

Once made, this soup does not keep very well, maybe a day or two at most in the fridge, but it is definitely best the day it’s made.

Side note: If, like me, you are foraging for your own mussels, choose small ones. I don’t like the super large mussels for this soup. But that’s just my personal preference. 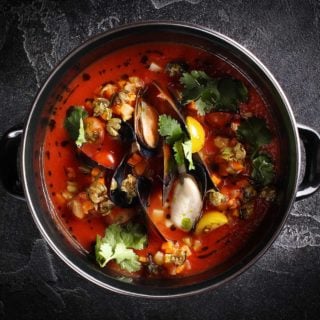