I am generally not a fan of canned meats and fish. Very few of them are as good as fresh (olive oil-packed albacore being a notable exception), and many go from wonderful to foul when punished by the rigors of the pressure-canning process. None in my experience suffer more than smoked mussels.

Mussels are delicate little creatures. Oddly shaped, they seem to be conjured from some as-yet-unknown Georgia O’Keefe painting. Eaten as soon as they pop their shells, they are wonderful bar food.

Messy, briny, usually studded with bits of garlic and greenery, accompanied by lots of beer or wine, a crust of bread to soak up the broth — eating mussels is only slightly less primal than sitting around cracking crabs or peeling crawdads.

But put mussels in a can and you wreck everything that’s lovely about them: Usually smoked, these sad morsels lose their delicacy and become chalky outlines of their former selves. I’ve hated them since I was a teenager.

Hated them so much I avoided smoked mussels wherever I found them. Until now.

Mussel season in California is open from November to April, and I try to make it early in the season, when the mussels are fat.

Both California mussels, Mytilus californianus, and the non-native blue mussel, Mytilus edulis, are all over the coast, waiting to be picked if you have a fishing license. But don’t ask me for my spot; I am not telling.

And as a side note, if you live in California you must call 800 553 4133 before you pick — this hotline lets you know if there are any quarantines, as there is in one of my spots right now. Eating quarantined mussels can kill you, so don’t forget that phone call…

But before I did anything with the mussels, I needed to clean them. If you buy mussels in the store, you need not do this. But wild mussels are not the cleanest things to work with. Here’s what I do:

Once your mussels are ready to rock, I steam them open in small batches, removing each one just as it pops open. When they are all open (toss those that don’t open), strain the liquid in the pot through a paper towel or cheesecloth and reserve.

Use a small, sharp knife to remove all the mussels — I try to get the little “scallop” muscle that keeps the mussel in its shell, too — and drop them into the strained broth.

Now you smoke the mussels for a couple hours, then toss them in some really good oil. Voila! A masterpiece.

You can just sit there and eat them, as I did, or you can make a seafood salad with them, add the smoked mussels to pasta or rice, set them out as a party appetizer or whatever. If you make too many, please don’t pressure can them. I vacuum sealed my extras and froze them. Thawed, they are almost as good as fresh. 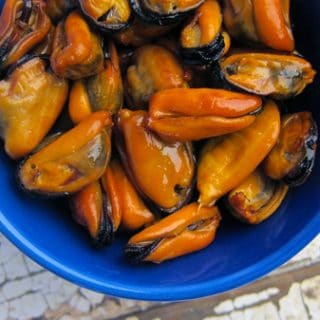 It doesn't matter whether you use wild or farmed mussels for this recipe. Just check any you have before you cook and if they are open, set them on the counter and tap them: if the mussels do not close, toss them. Sometimes mussels will gape when stored for a bit, and when they are cold they don't move very fast, so give this process a few minutes. I smoke my mussels over alder wood or a fruit wood like cherry or apple. You can try other woods to your liking. Please use a high quality oil for finishing the mussels. It makes a difference.
Prep Time30 mins
Cook Time1 hr 30 mins
Course: Appetizer
Cuisine: American
Servings: 8 ounces
Calories: 183kcal
Author: Hank Shaw