Winter is the best time for shellfish here on the West Coast, especially for mussels. Our mussels become toxic in the warmer months, and even the clams can get iffy in summer. So I find myself cooking this Sardinian soup between Thanksgiving and April, when our mussel quarantine begins.

Now this soup does not necessarily have to be a hearty winter warmer, but it definitely fits the bill — I’ve also made lighter, summertime versions of it substituting tomato for the roasted red pepper and easing back a bit on the pasta. Either way, this is an Italian classic.

Sardinian classic, really. And many Sardinians will make this distinction, noting that they were not part of greater Italy until quite recently. Their name for this soup is fregula kin arsellas, which is basically fregula pasta with baby clams. My recipe is loosely based on one I found in Efisio Harris’ Sweet Myrtle and Bitter Honey, one of the few books on Sardinian cooking written in English.

Traditionally this Sardinian soup is make with baby clams, so use them if you can get them. I use Western littlenecks, which are actually a kind of cockle, but Eastern littlenecks and Manila clams work great, too.

If you make this a mussel soup, it’s not traditional but is delicious. I also switch out the tomatoes in the classic version for fire-roasted red peppers, which are more of a winter ingredient for me.

My secrets to this dish are three:

While you need not do any of the special things I do to make this Sardinian soup, you really do need some sort of small pasta, ideally fregula pasta or Israeli couscous. You can buy fregula online, or you can find it at many good Italian specialty shops nationwide. Or sub in orzo. 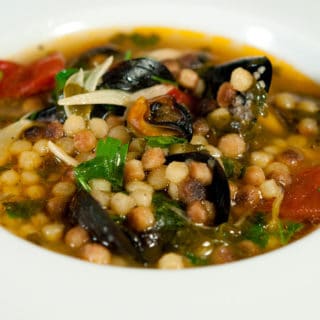 Making this soup is pretty straightforward, and the base stores well for a couple days in the fridge. If you do want to eat this soup over the course of a couple days, however, toss in only as much pasta and shellfish as you plan to eat in one sitting. This prevents the seafood from overcooking and the pasta from soaking up too much broth.
Prep Time30 mins
Cook Time25 mins
Total Time55 mins
Course: Soup
Cuisine: Italian
Servings: 6 people
Calories: 371kcal
Author: Hank Shaw