I’ve been obsessed with Mexican fried fish ever since I first ate it at a little Mexican seafood place called Mariscos Lauro Villar in Brownsville, Texas.

I was down there with my friends Jesse and Miguel chasing the wily chachalaca (a sort of grouse), and we saw a sign on the window that said “Chicharron de Catan.” Huh? Fried gar? Catan being the local word for alligator gar; everywhere else in Mexico calls the fish pejelegarto.

While I was intrigued, Jesse and Miguel were over the moon — they’d eaten gar before, and I had not.

We walked into the unassuming restaurant, it’s in a strip mall next to a liquor store that has really good mezcal, by the way, and confirmed that the chicharron de pescado was indeed catan. Claro que si, the waitress said, “yes, of course.” We asked for two orders.

It was amazing. What makes Mexican fried fish different from everyone else’s fried fish is that they’re going for a sort of cracklins’ thing with their fry — really kicking the spurs to it with the hot oil. So yeah, the fish is a bit overcooked, but it is super crispy.

Add gar to the equation and it’s even better. Gar fish has a texture closer to chicken breast than to its fishy cousins: white as snow, meaty and firm.

The dish was super simple. Fried gar on a plate with some shredded lettuce, a pickled jalapeno or two, limes and our choice of hot sauces.

Flash forward to a recent teal hunting trip to the Galveston area of Texas, and, as it happened, a guy named Austin, who takes care of the ranch we were on, brought me a little gar to cook. This was a spotted gar, not a giant alligator gar, but it’d do.

The meat was just like the alligator gar in miniature, and Austin showed me the fine art of getting inside one of these prehistoric fish; the skin on an 18-inch fish was almost as thick as that of a six-foot alligator.

I seasoned the fish, coated it in egg and then flour, then — and this is important — let it rest in the fridge for an hour. This helps the coating stick to the fish better. I fried it all in fresh lard and ¡A huevo! was it good!

You don’t need gar to make Mexican fried fish, but you do need a reasonably firm fish. We made it with largemouth bass as well as halibut, and both were good. Use what you have available. 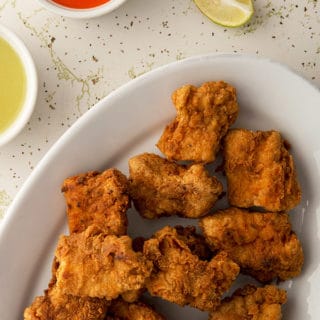 Use whatever fish you have available, but a firm, white fish is best. Use fresh-rendered lard if you want to be authentic, but any vegetable oil works fine. Serve with your favorite salsas. Oh, and yes, it's good in a tortilla, too.
Prep Time10 mins
Cook Time10 mins
Resting time1 hr
Course: Appetizer, Main Course
Cuisine: Mexican
Servings: 4 people
Calories: 410kcal
Author: Hank Shaw

Note: You can skip the resting step if you need to, but it won't be as good.