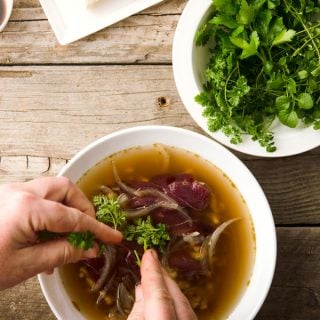 This is a fantastic goose soup that uses Scandinavian ingredients, but takes its inspiration from Vietnamese pho. It’s light, savory and fun to eat.

Vietnamese pho (pronounced “fuh”) happens to be one of the great soups of the world. I eat it all the time. The other day I thought to myself, “Self: Why is pho so damn good?” I’ll tell you why. It has it all: noodles, a mesmerizing broth, onions, various meaty things — usually long-cooked brisket and raw slivers of beef heated through by the broth — an array of fresh herbs to add, crunchy bean sprouts, lime wedges, chiles, and pretty much any sauce you feel like adding. Put simply, pho is the “choose-your-own-adventure” of soups.

It has savory. Sweet. Spicy. Crunchy. Starchy. Herby-bitter. Tangy, even funky if you add fish sauce. Everything our palates desire is in this bowl of soup. That’s why pho is so good. But, I asked myself, why should the Vietnamese have a monopoly on this? Could you not take the principles of pho and translate them into another culture?

Damn straight you can. And I did with this goose soup.

I have another recipe for a heartier, bigger goose stew, so I wanted this one to be lighter. It’s less complicated than the stew, richer than my recipe for smoked duck soup, although both are equally good.

I developed this goose soup in winter, and winter makes me think Nordic food. What excited me is just how fast I could come up with Scandinavian analogs for all of the things in a bowl of Vietnamese pho.

Pho begins and ends with broth. Pho broth is a wonderful clear base, with a noticeable aroma of star anise and cardamom. Cardamom? You mean the spice so beloved by the Swedes? Perfect. Start with a great broth and add crushed cardamom, or, of you can’t get it, allspice, another Scandinavian favorite. The result is remarkably similar to real pho broth.

You eat pho mostly for the noodles in it, though. Vietnamese pho has long rice noodles, which is fine if you are eating with chopsticks. But if you’ve ever tried to eat long soup noodles with a spoon, you know how futile that is. So my “noodles” became the rye spätzle dumplings from my recipe for duck and turnips. Easy to eat, big flavor. 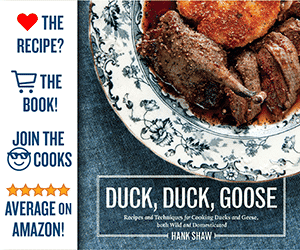 As for the meat, well, obviously this is a goose soup, so I went with goose. Duck works just as well. My favorite pho has slow-cooked brisket and raw beef. Easy to replicate by using shredded goose or duck confit and thin slices of goose breast, in this case a whitefront goose.

I know, I know, raw? Yes, raw. The meat is cooked by the scalding hot broth you pour over it. By the time you eat it, it’s cooked.

That left the accompaniments, which are vital to good pho. Herbs were an easy one. Vietnamese pho has basil and cilantro. Mine would have dill, chervil, parsley and chives — all herbs that figure prominently in Scandinavian cooking. Something crunchy to replicate the bean sprouts was easy, too: Thinly shaved red radishes, which were both crunchy and colorful.

There are no chiles in Nordic cooking, but they do have horseradish. And freshly shaved horseradish is every bit as stimulating as a chile; it really made the whole bowl of soup pop. Finally, the funky-acid one-two of fish sauce and lime can be approached with my malty, black beer vinegar, or malt vinegar if you don’t have beer vinegar.

Everything adds on itself in this goose soup. The more elements you bring to it, the better. You want something herby, something acidic, something spicy or sharp, and something crunchy. Let your imagination run wild on this one.

A tip for slicing the goose breast really thin is to freeze it slightly first. Leftover duck confit works well for the shredded meat, if you have some. If not, you can simmer goose legs or duck legs in some of the broth until the meat falls off the bone.

This goose soup was an experiment that worked out beautifully. Everything that the Vietnamese version has, only darker, more brooding and wintry, if that makes any sense.

The experience made me think: Could you do this with Italian ingredients? Mexican? French? I bet you could. Our favorite soups are often interactive, allowing us to “doctor” them to suit our personal whims. This soup does that, in one particular way. But there are other potential paths. Follow them. 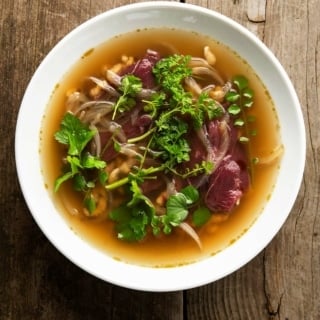 It's not important to try and repeat this soup exactly, as good as it is. It's more important to recognize the fundamentals that make this recipe what it is: Good broth, a pasta/dumpling element, lean, rare meat, slow-cooked shredded meat if you want that, too, plus the array of condiments. If you want to do this with chicken breast and legs, it'll work. If you want to do this with venison backstrap and stew meat, that'll work, too.
Prep Time20 mins
Cook Time1 hr 30 mins
Total Time1 hr 50 mins
Course: Soup
Cuisine: Scandinavian
Servings: 6 people
Calories: 317kcal
Author: Hank Shaw

NOTE: Prep and cook times assume you have broth and leftover meat handy. I use this recipe for duck broth.