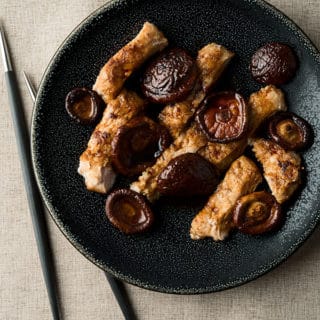 Pork shogayaki is a Japanese classic: Thinly cut, flash-fried pork cutlets in a zippy ginger sauce, and my recipe includes shiitake mushrooms.  Japanese ginger pork requires only a few ingredients, most of which are now in pretty much every supermarket, and it comes together in minutes.

Once in a while, either through hunting or because of our hog farming friends, we have lots of pork around the house. Mostly I cure the meat in various ways and make lots of fresh sausages, but the backstrap, tenderloin and other tender cuts usually get cooked simply, like this Japanese ginger pork.

More or less, shogayaki is a Japanese take on German jägerschnitzel. Pork loin, pounded thin, seared in oil, then doused in a sauce with lots of ginger and sometimes mushrooms. You can either leave the pork unadorned or dust it in a little rice flour, which is what I do.

The only tricky part to Japanese ginger pork is getting the ginger juice. Traditionally, you’d use a porcelain ginger grater, but you can also use something like a microplane grater, or do what I do and use a sturdy garlic press.

I like a full 3 tablespoons of ginger juice in here, but if you’re not a fan of, say, those spicy ginger beers, stick to 1 or 2 tablespoons.

The rest of the sauce is a bit like teriyaki, only there’s no sugar.

Mushrooms add heft and savoriness to the dish, and if you can find fresh shiitake mushrooms, get them. They are a perfect accompaniment for ginger pork. If not, use cremini or some other nice fresh mushroom. If you don’t like mushrooms, maybe baby bok choy or asparagus would be a good addition.

Traditionally, you would serve finely julienned cabbage alongside Japanese ginger pork, but I wanted a more refined plate for the photo. Feel free to add it, as that’s what you’d see at a Japanese lunch place.

Shogayaki is a fantastic, simple and fast meal to put together on a weeknight. Serve this with shredded cabbage or daikon radish, Japanese-style rice and maybe a cucumber salad like this one from my friend Elise at Simply Recipes.

And if you happen to be making Japanese ginger pork in the early winter or late fall, you could do worse than serving it with Japanese matsutake mushroom rice, matsutake gohan ora bowl of Japanese clam soup. 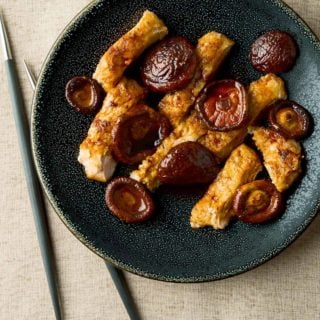 I use loin meat from a wild hog here, but obviously store-bought pork is fine, too. I like shiitake mushrooms, but you can use any meaty mushroom. Or skip them, since they are not traditional in shogayaki.
Prep Time15 mins
Cook Time10 mins
Total Time25 mins
Course: Main Course
Cuisine: Japanese
Servings: 4 people
Calories: 373kcal
Author: Hank Shaw