Sometimes the whole is far more than the sum of its parts. Such is the case with this clam soup. It’s Japanese, and its simple elegance won me over, and I hope it does for you, too.

When most people think about a clam soup, they think clam chowder. This is most definitely not that, but if you want one, I have a recipe for Maine clam chowder here.

I first heard about clear, simple Japanese clam soups decades ago, while watching the Japanese version of Iron Chef, which is the original, by the way. I later saw them on one of my favorite TV shows, “Midnight Diner,” and I finally got around to making one after I bought Sonoko Sakai’s wonderful cookbook Japanese Home Cooking. This recipe is inspired by hers.

The soul of this type of clam soup is dashi, the simple seaweed-and-dried-fish-flakes broth so common in Japan; fresh, small clams; and a green thing. Each ingredient needs to be good to really appreciate this dish.

Sakai has a recipe for clam soup with wakame seaweed, which you can find if you happen to have a decent Asian market in your town, or you can buy online. I actually skipped it because I had something I like better: sea rocket and sea beans.

Both are seaside wild greens I’ve eaten since I was a little boy — digging clams is also something I’ve done since I was a toddler. Sea rocket, Cakile maritima, is a salty cousin of arugula, while sea beans, which are any one of the salicornia species, are crunchy, salty green things.

Sea rocket is an invasive species in California, so I feel good about eating it, and sea beans are wildly abundant. Both were growing near where I dug the clams for this clam soup.

Another sea green, sea orache, lives there, too. You could use that if you want, or it’s common weed cousin, lambsquarters.

Other than the seaweed — wakame or sea lettuce would be what you’ll want to use — or sea greens if they’re around where you live, this clam soup is austere: The only other ingredients are the clams and a little garlic and sesame oil. Chives for garnish if you want.

Use small, hard-shelled clams. I used Western littlenecks, which is what we have here, but Manila clams, venus clams, Eastern littlenecks or topnecks also would be good.

So to sum up, making this clam soup is easy, but it does require a few ingredients not in standard American supermarkets — that said, here in California where there is a sizable Japanese-American population, these ingredients are in most supermarkets, but that’s the exception.

Once made, this clam soup needs to be eaten. It doesn’t keep well. If you do need to do this in stages, the easiest thing to do is make the dashi broth, then keep it in the fridge for up to a week. Everything else comes together in minutes. 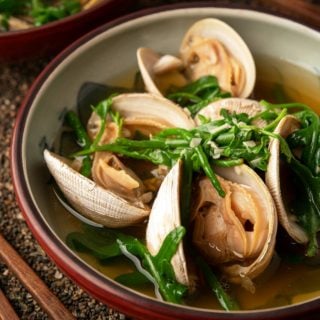 This is a very simple clam soup that comes together fast, but you do need some special ingredients. They are listed above, along with tips on how to get them.
Prep Time20 mins
Cook Time10 mins
Total Time30 mins
Course: Appetizer, lunch, Soup
Cuisine: Japanese
Diet: Gluten Free
Servings: 4 servings
Calories: 95kcal
Author: Hank Shaw

If you want, you can use oysters, scallops, small shrimp or crabmeat for this soup.