Matsutake mushroom. Pine Mushroom. Tricholoma magnivelare. After having never even knowing of their existence for the first 30 years of my life, I’ve cooked with them enough since I’ve moved out West a decade ago to get a sense of how to cook this magical mushroom. There’s a lot to know.

For starters, confusion reigns about which mushroom we are actually talking about. Our matsutake is not the same as the one in Japan, nor is it the same as the “matsutakes” found in the Eastern United States or in Europe, where a related mushroom is known as the pine mushroom or St. George’s mushroom.

The Latin names for matsutake are all over the place, too, and the mushroom has been jumping genuses for years now. Suffice to say this is one of those “species complexes,” like honey mushrooms or oyster mushrooms or grissettes.

All of them, however, are large, firm mushrooms that are more or less white or ivory colored. Almost all live with conifers of some sort, although here in Northern California they like tanoak and a few other plants I will not mention. Gotta guard my spots, you know…

That of course leads me to another aspect of matsutake mushrooms: They are expensive. Horrifically so. I saw some old, crappy ones in our local Whole Foods last month and they were charging $35 a pound for them! And perfect Japanese matsutakes can fetch more than $100 each. It is the only mushroom I know of where the commercial competition has been so fierce that many pickers once carried pistols with them.

What’s the big deal? Well, matsutakes are very firm, which makes them exciting to work with as a cook. They are big, so you can do all sorts of things with them. But the real reason is the aroma. Ah, the aroma of a matsutake.

The most famous description is from David Arora, who wrote the bible on North American mushrooms, Mushrooms Demystified. Arora describes the smell of a matsutake as a combination of wet socks and red hots — red hots being a once-popular cinnamon candy, for anyone not familiar with them.

I’m not so sure about Arora’s description, however. I think they smell like pine trees, resin and wet earth — although it definitely has a cinnamon thing going on, too. Apparently the Japanese matsutake have the strongest aroma, followed by our Western ones.

What you see pictured above are top-quality matsutakes. You can tell because their veils are still attached to the stem. This veil breaks as the mushroom ages. From an eating standpoint, as the mushroom ages, the quality loss is mostly in aroma — but also in the mushroom’s health benefits, if you believe in that sort of thing.

Strong scientific evidence suggests that eating lots of matsutakes can reduce or inhibit the growth of tumors (if you happen to have any) and that they are a powerful scrubber of the sort of “free radicals” that can lead to cancer (and anarchy). By far the best matsutakes are large ones that have not yet broken their veil.

As far as identifying matsutakes in the field, it’s not that tricky — but you do need to study up on them with a good field guide. As I mentioned before, Arora’s Mushrooms Demystified is the best book, but there are other good ones, including the Field Guide to Mushrooms of Western North America and North American Mushrooms: A Field Guide to Edible and Inedible Fungi.

Here in Northern California, you do need to watch out for a couple poisonous amanitas that look sorta similar, notably A. smithiana and A. silvicola. Amanita expert Debbie Viess notes that the ring around the stalk of a matsutake points upwards, not down as it would with an amanita, and that matsutakes are way more firm than any amanita. “Matsie buttons are so hard that they can squeak when cut,” Viess notes.

Just to be safe, look over every mushroom you bring home before eating — even experienced shroomers can accidentally pick an “off” one, and with some amanitas, that mistake can be, well, costly…

When it comes to cooking matsutakes, Japanese cooks are the undisputed masters. Most of what I know about this mushroom is from researching Japanese methods and recipes. The Japanese revere matsutake, which means “pine mushroom,” and treat them like the special ingredients they are, although I am certain the Koreans and Chinese do, too. If you know of any Korean or Chinese matsutake recipes, please share!

The Japanese have a few rules when cooking matsutake:

That said, I’ve read all sorts of conflicting information on how “best” to cook matsies. Some say slice thin and eat raw. Some say never sauté. Others wax poetic about sautéed matsutake. Here’s what I know.

The first thing I ever did with matsutakes was to coat them in olive oil, salt them, skewer them on rosemary branches, then broil. (It was raining out, otherwise I would have grilled them.) They were delicious. Still firm, still smelling of cinnamon and pine, with just a little caramelization on either side. The Japanese grill their matsutakes simply this way, too, only using shoyu and mirin. Lesson learned: Don’t mess with these mushrooms too much, or you will lose what makes them special.

I’ve also scattered sliced matsutake on trout or steelhead and wrapped the whole thing in foil. Again, big-time aromas and flavors. Lesson learned: Matsutakes really benefit from a cooking method that traps the aroma, as well as a shot of acid at the end.

Another classic matsutake mushroom dish is a clear broth with the mushrooms. My friend Jaden Hair has a great version of this recipe on her website, Steamy Kitchen. The Japanese make this with dashi broth, but a light game broth, like grouse or pheasant, is perfect, too.

I’ve also tempura-fried matsutakes, which is awesome. Fried mushrooms can be heavy and greasy, but tempura is by definition light and crispy — what’s more, the batter holds in the aroma. Lesson learned: Everything tastes good fried.

But if you’ve never cooked matsutakes before, you really ought to start with the bedrock dish: matsutake gohan, a Japanese rice dish. it’s easy as pie, really captures the aroma and flavor of the mushrooms, and is about as Japanese as you can get. 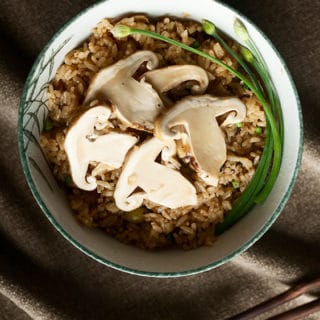 There is no getting around it: You need some Asian ingredients to make this recipe as written. While you can substitute store-bought shiitake mushrooms here -- very different, but still delicious -- you do need the Japanese "trinity" of soy sauce, mirin and sake. You also really ought to have a proper dashi broth, too, although you could substitute chicken broth if you had to. You will see I am using Chinese chives here, but any chive (or even green onion) will work fine.
Prep Time25 mins
Cook Time35 mins
Total Time1 hr
Course: Main Course, Rice
Cuisine: Japanese
Servings: 4 people
Calories: 402kcal
Author: Hank Shaw