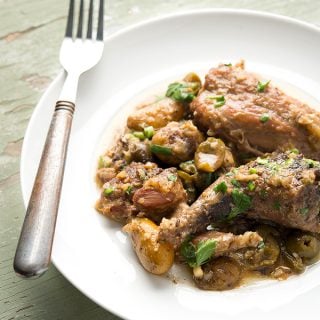 A few years ago, I’d been working through my remaining game meats from the previous season, and I came upon a lone Western gray squirrel. For a while I was waiting to shoot another one, because as large as Western grays are, they are still pretty much a single-serving critter.

But the season ended, and with it the chance at another squirrel. So in the freezer it sat. I thought about making a hunter’s stew, but I really wanted to highlight the little beast and mixing it in with other meats would defeat that. Highlight squirrel meat? You bet.

I have a thing about squirrel hunting. I wrote about it for the now-defunct magazine Meatpaper some years back. The article was about how for many who hunt the wily squirrel, squirrel hunting becomes part of their identity.

I am no different. I know many hunters, but very few who deign to hunt Mr. Bushytail. He’s either too small, or too much like a rat (they are cousins, after all) or something only Those Other People (insert derogatory ethnic group here) eat. I would like to affiliate myself with Those Other People.

Squirrel hunting with a .22 rifle is exactly like deer hunting: You need to be just as stealthy and just as good a shot. Mind you I am talking about wild, forest squirrels, not those that scamper around at the Capitol or your backyard.

And squirrel meat is delicious. Squirrels can live a long time, up to 6 or 7 years, and as such can be deeply flavorful. The meat looks like rabbit, but is grayer. It has a far denser texture than rabbit, which rarely live more than a year. Squirrel also takes on flavors of what it eats — yes, you really can taste a nutty flavor in squirrels that live in a walnut grove.

Back to the lonely squirrel in my freezer. I finally decided to braise him slowly, because that’s the safest thing to do when you don’t know the age of a squirrel — young ones are fantastic fried like your favorite fried chicken recipe. But what sort of braise?

I immediately thought of a Spanish braise I’d made years back when I hunted squirrel in Minnesota. Squirrel Aurora is loosely based on a rabbit recipe in the late Penelope Casas’ Delicioso! The Regional Cooking of Spain

, a fine cookbook. The main flavors are almonds and green olives, both of which I had lying around. But with only one lonely squirrel I added fingerlings to bulk it up; it proved a good choice.

The dish is fantastic: A rich sauce, a dense, flavorful meat, great with crusty bread. What’s not to love?

If you have an old squirrel, which you can tell by the teeth, which are yellowy and separated, or by the ears, which are tattered, or by the feet, which look well-worn, braising is a must. Squirrels can live several years, unlike cottontail rabbits, which typically only last a year or so. This makes their meat a bit more complex and considerable denser. But an old squirrel can be tough if not braised. I almost always cook squirrels with some sort of nut sauce. Call me macabre. It's a luxurious, thick stew that cries out for crusty bread. The combination of almonds and olives is also a hit.
Prep Time20 mins
Cook Time2 hrs
Total Time2 hrs 20 mins
Course: Main Course
Cuisine: Spanish
Servings: 4 people
Calories: 624kcal
Author: Hank Shaw

Figure on one Eastern gray squirrel per person. Or you can use 2 fox squirrels or Western grays to feed 3 people, or 1 cottontail for two people. If you are not a hunter, 1 domestic rabbit will feed 2 to 3 people. And yes, you can use chicken thighs and legs, too.