I am here to tell you that smoked bison brisket can be as good as beef, but because bison are so lean, you will need to modify how you go about it. Here’s how to smoke yourself a tender, juicy bison brisket.

The most important thing you must remember is that smoking a bison brisket takes time. Lots of time. Longer than beef.

This is for two reasons: First, bison tend to be slaughtered (or shot when hunted) far older than the beef you buy in the store, so the meat will be tougher — but more flavorful. The second reason is because bison is lean the brisket will spend more time wrapped than a beef brisket would.

If you are new to smoking brisket, it generally goes like this: You smoke the meat for a few hours, and by a few I mean anything from three to eight or more, then you wrap the brisket in either butcher paper or foil, letting it steam so the connective tissue melts and the brisket becomes tender.

Yes, you can in theory smoke a brisket unwrapped the whole time, but few people do these days.

Bison brisket needs that wrap time. A lot. More than you think. This is because its connective tissue is stronger than that of store-bought beef.

So my general method follows this:

But I can assure you: Eventually, bison brisket will get tender! Let’s break down these stages.

I am a purist in the Texas style of smoking brisket, so for me, seasoning is only salt and freshly ground black pepper. That’s all. I want to taste the meat.

That said, apply any rub you want to your bison brisket. Most have salt, and if not, add some.

When? Ideally the night before you start smoking your brisket. This lets things settle and stick, and the salt will penetrate the meat.

Cold meat develops a better smoke ring because the ring stops developing once the meat hits an internal temperature of roughly 140°F. So the longer the brisket takes to get there, the better the smoke ring.

Wood is up to you. I prefer oak, hickory or fruit woods here, and mesquite if you want a strong smoke flavor. Avoid alder, as it’s too light for bison brisket.

Wrapping is your call. I’ve done both foil and butcher paper, and for bison brisket I prefer foil because it seals better, so you lose less moisture.

With a beef brisket, there’s a lot of fat that renders out and it bastes itself. Less so with bison brisket. So I want a full seal to prevent moisture loss. Beef is also a looser, wetter meat than bison.

While you could leave the wrapped brisket in the smoker to finish, I prefer moving it indoors to finish in a 225°F oven. How long? Well, be prepared to wait.

A good indicator of when a brisket is done is when you can slip a knife through the fattest part into the meat easily. You can also do the jiggle: Unwrap the brisket and jiggle it. If it wobbles, the connective tissue has softened and you are ready to rock.

If you are looking for an internal temperature, the interior of the brisket will be about 210°F, give or take five degrees. You could pull it at 200°F if you get the good jiggle.

It is very important to rest your bison brisket for at the very least 1 hour, still wrapped.

Some brisket aficionados will wrap the wrapped brisket in a towel or more butcher paper and set it in a cooler to rest for many hours. This can be a great way to hold a finished brisket until ready to serve.

If your bison brisket is foil wrapped, wrap it in one more layer of foil, then swaddle that in a bath towel, then put that in a cooler just large enough to hold it. It will keep at a safe temperature for hours this way, and just get better.

How Long Does it Take?

Well, from the beginning of smoking to slicing, about 14 hours. This is longer than most beef briskets, for all the reasons I’ve mentioned. So allow that much time. A better idea is to make your bison brisket the day before you serve it, so you just have to reheat it. It’ll be fine.

Most people smoking a bison brisket will have bought their meat. But if you are a bison hunter, you will want to harvest the brisket off your animal yourself, unless you have a very good, trusted processor.

You do that by removing the brisket with its fat cap off the bottom of the front of the animal, between its forelegs. This is a decent video showing the process.

You might ask yourself if you can do a brisket from a deer or elk or moose. The answer is “sorta.” I always harvest the brisket off my animals, but because the fat from cervids is very waxy, and because you need that fat to make a good smoked brisket, I don’t advise it.

I braise deer or elk briskets and shred the meat for dishes like Mexican salpicon. A better method for smoking venison would be to use my recipe for smoked venison roast. 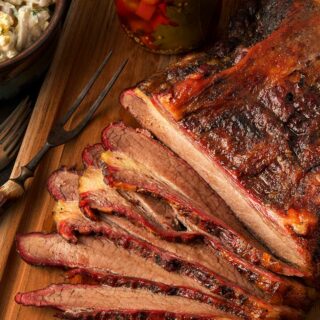