In much of Mexico, tacos de cabeza is made with a cow’s head; indeed, this is what you’ll get when you order cabeza at any taco truck in Sacramento, where I live.

But in Quintana Roo, a Mexican state on the Yucatan Peninsula, they use a pig’s head. This is my rendition of their method.

, one of the fantastic series of state-level Mexican cookbooks that, now that I can read in Spanish, have become a major source of inspiration for me.

The recipe is super simple, and bears some resemblance to the more familiar dish cochinita pibil. Incidentally, if you want to make this recipe but don’t happen to have a pig’s head available to you, go ahead and make that cochinita pibil recipe, using pork shoulder. Only major difference would be in texture, and the chop. In this recipe you chop the meat, and in cochinita pibil you shred it.

The other primary difference between the two is that you want to give the pig’s head a full blast of smoke for a few hours before you braise it. You can even do the whole process in the smoker if you want. You will need to wrap the pig’s head in foil or banana leaves after a couple hours anyway, so it makes no difference where you finish it.

Making tacos de cabeza is something of an all-day affair, because it can take many hours for the pig’s head to fall off the bone, especially if you are using a wild pig or a javelina.

I used a skinned head, incidentally, but a skin-on one works fine, too. As for what to do when it’s done, you will want to pull off all the meat you can find, as well as other naughty bits here and there tucked away in the skull. Brains? Sure, if you want. Eyes? I didn’t, but I sure used the meat behind them. Palate? That was a big nope, but people in Mexico like it.

Oh, and I peel the tongue, but you don’t have to if you don’t want to. It’s messy, but I don’t like the thick skin on it.

All of this gets chopped with all the fat and juices and marinade, then served very simply in corn tortillas. I just went with red onions soaked in lime juice and cilantro. If you happen to have the herb culantro around, use it; it’s more authentic. 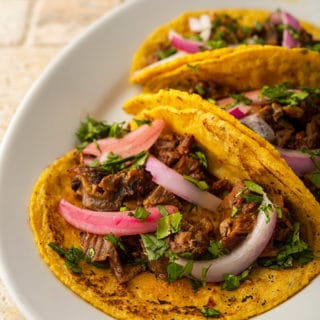 This version uses a pig's head, although there's no real reason you could not use a sheep, goat or cow's head if you wanted. If you do use a cow's head, double the marinade.
Prep Time15 mins
Cook Time6 hrs
Marinating time1 d
Course: lunch, Main Course
Cuisine: Mexican
Servings: 10 people
Calories: 25kcal
Author: Hank Shaw

NOTE: You can buy shelf-stable sour orange juice, naranja agria, in Latin markets, or make a substitute by mixing the juice of 1 grapefruit, 1 lime and 2 oranges.