Stuffed clams is what this recipe is called officially, but in our household, they’ve been known as “clam things” for at least two generations.

My mom named them that, and even had pretty green ceramic clam shell bowls strictly for the purpose of making clam things. I didn’t even know that she was making a variant of Rhode Island “stuffies” until I saw it on a menu in Rhode Island when I was a twentysomething.

What are stuffies? Basically chopped clams, usually but not always quahogs (Mercenaria mercenaria), mixed with breadcrumbs or crushed crackers, with sautéed onion, celery and green pepper, sometimes bits of bacon, and often hot sauce and/or Worcestershire.

You stuff the mixture into large, clean clam shells, ramekins, or, if you happen to have the clam shell bowls, those would do nicely.

Mom’s recipe demands a particular ingredient I would never have in the house otherwise: Ritz crackers. Sure, you could use breadcrumbs, but it’s just not the same. I buy the packages of Ritz that have several small sleeves of crackers, because, well, I never eat them as-is, and want them to be fresh for the next batch of stuffed clams.

Mom also uses butter, lots of it. But another perfectly good option is to fry some bacon, chop it up and add it to the mix, and use the bacon fat instead.

I do deviate in one place from Mom’s recipe: I roast my green peppers where she does not. I also prefer to roast Anaheim or poblanos instead of regular green peppers. You can do either.

Well, to be perfectly honest, I deviate from Mom’s clam things in another way: I use the clams available to me, which are horseneck or butter clams, which are also called Washington clams. They are large, open-shelled clams of the Pacific Coast I dig every year.

If you have those, you’ll want to make New England fried clams, or Spanish clams and chorizo. If you really want to do a New England clam feast, my mom’s Maine clam chowder will do well as the soup course.

And yes, you can make stuffed clams with canned clams, but I don’t. 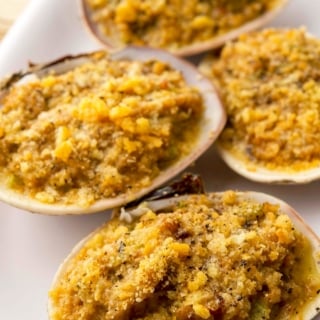 You can make these either with large clams with the meat chopped, or as individual clams if you use small clams like cherrystones. If you do that, no need to chop the clams.