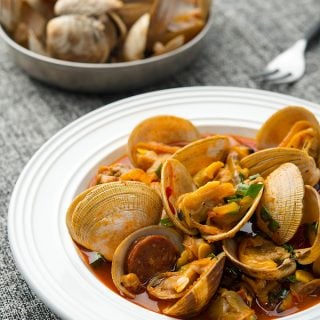 There is nothing more Iberian — meaning Spanish, Basque or Portuguese — than the combination of shellfish and pork, and that usually means clams and chorizo.

It’s a magical pairing, unless you are Jewish, in which case it’s a double whammy of “nope, can’t eat that.” Indeed, some food historians think this combination originated with the Spanish Inquisition, as a way of testing Jews who had supposedly converted to Catholicism. Yikes…

Anyway, it’s a damn good plate of food, and fun to eat. The double hit of savory umami from the clams and chorizo, tartness from lemon juice, saltiness from both the broth and the sausage makes this dish a classic for a reason.

I foraged my own clams at an Undisclosed Location on California’s North Coast, and made the Spanish chorizo myself, kinda-sorta following the recipe from Charcutería: The Soul of Spain. You can of course buy your clams and your chorizo. Much easier.

If you do buy your clams, buy them at a place that sells a lot of clams. In most cases this is not your grocery store. Clams can live several days out of water, but they will die eventually. Gaping clams are not necessarily dead, either, but gaping clams that don’t respond when you tap them probably are.

Turnover is key. When I am forced to buy clams for cooking events I do, I get the fishmonger all pissed off by requiring him to set out the clams so I can touch them. I then tap each one that’s gaping, and if they respond I take them. And yes, I usually apologize to the person in line behind me.

If you collect your own clams, be sure to purge the sand out of them first. I wrote a tutorial on how to get sand out of clams, so you can follow that.

As for the chorizo, specialty stores will have Spanish chorizo, which is a hard salami, but I have also done this with fresh chorizo from a Mexican market. Different, but both work.

My final piece of advice to get the most out of this recipe is to do your best to get real Spanish pimentón, the smoked paprika they use a lot, and to get the best loaf of bread you can find.

And please don’t slice your bread all dainty-like: Tear it into pieces as you eat, using it as a “spoon” to get yummy things onto your fork and to soak up the fantastic broth. Eating a bowl of clams and chorizo should be primal, and the torn bread just seems more natural. 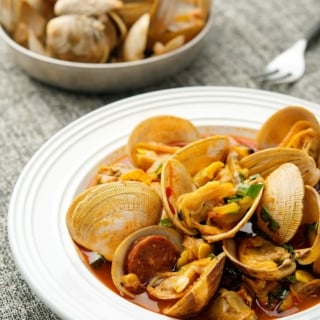 I use Western littleneck clams for this recipe because that's what I can forage for here in NorCal. You could use any small hard-shell clam, and Manila or Eastern littlenecks are just as good or even better than then Western clams I use.
Prep Time20 mins
Cook Time20 mins
Total Time40 mins
Course: Main Course
Cuisine: Spanish
Servings: 4 people
Calories: 385kcal
Author: Hank Shaw

I like to eat this with good bread and a dry rose or a very light red, like a Spanish Garnacha, California Gamay or French Beaujolais. Hard cider is another good choice here, as would a full-flavored white wine like a Portuguese Verdelho.