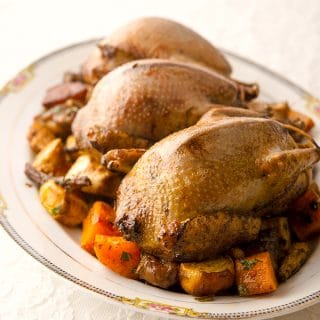 There is another way. I recently bought a nifty kitchen device called the Searzall Blowtorch Attachment. You screw this baby onto a Bernzomatic TS4000 Trigger Start Torch, which uses for fuel those little green propane tanks you get in the supermarket. Why not just use the torch? Because it gives meat a nasty propane stink. The Searzall converts the propane flame into radiant heat energy. I used the Searzall to pre-cook the legs and wings of the pigeons here, and it worked like a charm.