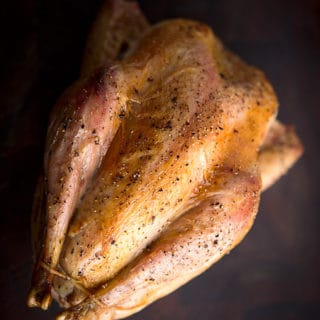 When life gives you a beautiful pheasant, one that you have not shot up, you should roast it whole like a chicken. But a pheasant is not a chicken — it can get dry and ugly very fast if roasted poorly. That’s where this recipe comes in.

This roast pheasant recipe, unlike many of the others you may have seen, relies on a few special tricks. One is an eight-hour brine; this will season the bird and help it to retain moisture.

Brining is a critical step when roasting lean game birds such as wild turkey, pheasant, sharp-tailed grouse, or even smaller birds such as chukars or quail. You risk dry birds if you skip this step.

It can also help chicken or Cornish game hens, although you’ll need to check, as many store-bought chickens are pre-brined.

Serve your roast pheasant with root vegetables, mashed potatoes or roasted Brussels sprouts. A big white wine or a light red is a good choice, as is a hard cider or pale ale.

Follow these general instructions and you will get a lovely, moist bird. This technique also works with ruffed grouse, chickens and guinea hens. Serve with a nice white wine, some mashed potatoes and a vegetable of your choice. A good option is to cut up some carrots, potatoes, parsnips, celery root and turnips and roast them with the birds. I have a similar recipe for roast partridge, if you are looking for something a little different.
Prep Time10 mins
Cook Time1 hr
Total Time1 hr 10 mins
Course: Main Course
Cuisine: American
Servings: 6 people
Calories: 476kcal
Author: Hank Shaw