Woodcock are such a special bird that they ought to be treated specially in the kitchen; thus this simple woodcock recipe.

Unlike my recipe for roast woodcock, this one can be done on the stovetop in a pan. I am generally using the same technique I use for quail and partridges, and pairing the birds with roasted mushrooms, garlic cloves and Brussels sprouts.

I like to serve all this on a bed of wild rice, and while you could skip that if you want, wild rice and woodcock are both symbolic of Minnesota’s Northwoods, a place I return to time and again to chase these funny birds.

Mudbats, timberdoodles, bog suckers, whatever you call them, woodcock are an odd bird. They hang out in very dense alder thickets, so dense that the saying is if you can toss your hat and it actually hits the ground, you need to move to thicker cover.

Shooting a limit, usually three birds, ranges from anything from impossible to laughable. I’ve walked from dawn to dusk with none, and have also shot a limit in 30 minutes. But hunt them while you can. Woodcock are migratory birds, so they will only be in your woods a few weeks at best.

Unless, that is, you live in Louisiana, where it is said that all woodcock spend their winters. Someday I will chase them there in January…

Back to this woodcock recipe.

Woodcock are opposite birds, meaning they have dark meat breasts and light meat legs. And you want both the legs and the skin for this recipe. Why? They taste amazing, like nothing else — certainly nothing like you’d imagine a worm-eating ground bird would taste.

See all that fat on those plucked woodcock? You want that. Yes, you do…

Woodcock happen to be easy to pluck. No wax or water needed. Just take your time and it’ll be fine. And yes, you might mess up a few birds before you perfect it, but know that plucking a woodcock is nowhere near as hard as plucking a grouse.

Sometimes I like to leave the feet on the legs, mostly because they look cool. You can snip them off. You will want to sear the breast meat of the woodcock to about medium, and cook the legs a little longer. Err on undercooking the breast and overcooking the legs.

As for the vegetables, I really like the combination of shiitake mushrooms and Brussels sprouts, with some big garlic cloves tossed in. Oil them, salt them and roast at 400°F uncovered until things get all brown and toasty, about an hour.

Serve it all together in a shallow bowl, maybe with a dash of Worcestershire sauce, and you are good to go. 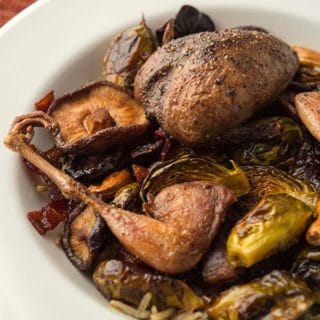 This general recipe will work with all small birds, from quail to snipe, doves, pigeons, partridges or teal ducks. You can very the vegetables, too, if you want. I like this over a simple plate of buttered wild rice.
Prep Time15 mins
Cook Time45 mins
Course: Main Course
Cuisine: American
Servings: 4 people
Author: Hank Shaw