So, for those of you who are not familiar with New Orleans BBQ shrimp, this dish might seem confusing. After all, it’s not, strictly speaking, barbecue. But it is amazing, and easy to make when you find yourself with good Gulf shrimp.

Legend has it that BBQ shrimp was invented in the 1950s at a NOLA restaurant Pascal’s Manale when a guest, who’d returned from a trip to Chicago, described something like this to the chef at the time. The chef then created what was to become one of the iconic dishes of the city; it had little to do with whatever it was the guest had in Chicago, but it was, and is, amazing.

Couple funny things about New Orleans BBQ shrimp: Although its origins are in an Italian restaurant and it calls itself barbecue, it’s really neither. The dish is deeply, intensely Creole-French.

The only real connection with barbecue sauce is that this sauce hits the same notes: spicy (but not too much), sweet, salty, tart, rich. Just like a good barbecue sauce. I’ve also heard tell that this sort of BBQ sauce as we know it now was not universally known until the 1970s, two decades after this sauce was invented.

My recipe for New Orleans BBQ shrimp is based off my friend John Currence’s recipe in his excellent book Pickles, Pigs & Whiskey, which is well worth your money if you like Southern food.

This is something of a “restaurant” version of the dish, with the shrimp peeled before you serve it, making the whole thing easier to eat. Feel free to leave the shells on if you want a more authentic experience, and if you can get your hands on head-on Gulf shrimp absolutely use them and leave them whole.

There are no “weird” ingredients in this recipe, although I will warn you that you need a lot of Worcestershire sauce, though: A full cup, not just a few dashes. And trust me, the finished sauce really works.

You get that zing from the Worcestershire and Creole seasoning, some herbal notes, body from a full-on, French-style reduction, all rounded out with heavy cream and, well, a slightly obscene amount of butter. Do not skimp on the butter or cream in this recipe, or else the sauce will be too sharp, almost unpleasant.

Once made, your New Orleans BBQ shrimp can be reheated, but it won’t be as good. Better to gorge yourself and regret it later. If you do somehow have leftovers, very gently reheat them and eat with bread.

If you are looking for some other great Southern shrimp recipes, try my Lowcountry shrimp perloo, Cajun jambalaya, or make yourself a batch of Gulf pickled shrimp. 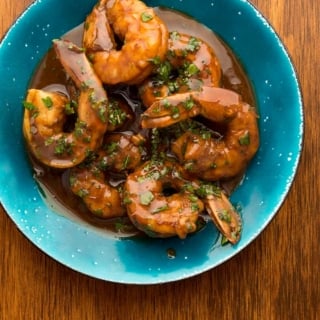 In general you want to use larger shrimp here, but any size will work. I prefer real Gulf shrimp, too. If you want to play with this recipe, try the sauce on lobster or any white, firm fish.
Prep Time30 mins
Cook Time30 mins
Course: Appetizer, Main Course
Cuisine: American, Creole
Servings: 4 people
Calories: 463kcal
Author: Hank Shaw