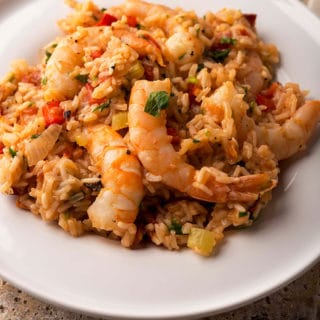 In Charleston, South Carolina, rice was once king. And this Lowcountry perloo was once one of that region’s crowning dishes.

Perloo. Such a strange name, and spelling. It gets even stranger when you see it spelled purloo or perlo. But if you say it, and you’ve been exposed to the cooking of certain parts of the Middle East, India or East Africa, you’ll recognize that this is a version of pilau.

And if you eat it, you will taste echoes of its more famous cousin, Louisiana jambalaya.

Perloo’s origins lie in Africa. West Africa, to be exact. The concept of a one-pot, rice-and-whatever dish exists wherever rice is grown, and in Senegal there is a dish known as jollof rice, with its own variations throughout that part of Africa. Two centuries ago, Charleston was the entry point for roughly 40 percent of all African slaves to this country, and the city’s cuisine reflects those African roots.

Even the rice is African, Oryza glaberrima, which is a different species than the Asian rice we all buy today. And while African rice hasn’t been grown commercially in the Lowcountry since the 192os, it’s recently been revived as Carolina Gold rice, which is a hybrid between the old African rice and Asian varieties. (You can buy buy Carolina gold rice

Many varieties of perloo exist. I’ve seen them loaded with pig parts, with chicken, rabbit, or game. But mostly perloo is about seafood, and mostly that seafood means shrimp, crab and oysters.

Mine just has shrimp, but you can add the other seafood if you’d like.

What shrimp? Well, American shrimp, of course. I strongly urge you to seek out real American, usually Gulf, shrimp. Our shrimp industry is as sustainable as any in the world, it doesn’t destroy the environment the way Southeast Asian shrimp farming does, and, importantly, supports American jobs. Any size shrimp will do.

Me? I catch my own. My friend Joe Baya of the magazine Great Days Outdoors has a recreational shrimp net we haul around when I visit him on Dauphin Island, south of Mobile, Alabama. Dauphin Island is just down from Bayou la Batre, of “Forrest Gump” fame. So the shrimp in the picture are Gulf shrimp, not South Carolina shrimp.

Some sort of smoked pork is vital to a good perloo. Bacon is what I use, but salty country ham or salt pork will also work. Jowl bacon is ideal. And yes, I’ve seen sausage in perloo, too, but to me that tips it a bit too close to jambalaya.

When you make this, it makes enough for a crowd. So if you’re not a crowd, reheat your perloo in a microwave for 30 seconds or so, or do what I do and reheat it on the stovetop in a covered, non-stick pan over very low heat for about 20 minutes.

Perloo, perlo, purloo or pilau, however you spell it this one-pot rice dish is fantastic. I urge you to use American shrimp when you make this recipe, and if you can, use Carolina Gold rice, which cooks a little differently from regular long-grain; but definitely use a long-grain rice if you can't find Carolina Gold.
Prep Time30 mins
Cook Time30 mins
Total Time1 hr
Course: Main Course
Cuisine: American
Servings: 6 people
Calories: 594kcal
Author: Hank Shaw