Nettle ravioli are a wonderful way to celebrate the coming of spring.

Stinging nettles are a traditional springtime food wherever they grow. There is a reason for this. Despite their ferocious stingers, stinging nettles are incredibly high in vitamins C, D, iron, potassium, manganese, and calcium. Nettles are unusually high in protein for a green plant, and are usually pretty common in cool, wet weather.

Many, many cultures turn to nettles to break the nutritional privations of winter, when few green things are available. This is what happened in Italy’s alpine regions, among other places.

This recipe is a mashup of two traditional Italian nettle pastas. The pasta itself is a nettle pasta, which when cut into linguini-like strands is called strettine.  The filling is from the far north of Italy, Alto Adige and Trentino. It’s surprisingly like an Irish colcannon: mashed potatoes with minced nettles — plus a healthy bit of mascarpone cheese to make it Italian.

You’ll want to serve your nettle ravioli simply, with melted butter, a little pecorino cheese, some freshly ground black pepper. Oh, and a white wine, ideally a big one like a white Bordeaux or Cotes du Rhone.

Step by step instructions on making the nettle pasta are here. Here’s how to make the raviolis themselves.

If you are looking for other recipes using stinging nettles, try my nettle pesto, or Scandinavian nettle soup, or German nettle spätzle. And if you want another great ravioli recipe using wild ingredients, I am particularly fond of my mushroom ravioli recipe. 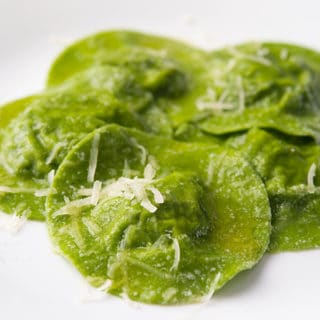 Once you make your ravioli, you can freeze them for up to a few months before they get too brittle. To properly do this, arrange uncooked ravioli on a baking sheet that has been dusted with semolina or cornmeal. Put the baking sheet into the freezer. When the ravioli have frozen solid, about 2 hours, you can move them to a freezer bag and store that way.
Prep Time1 hr 30 mins
Cook Time10 mins
Course: Appetizer, Main Course, Pasta
Cuisine: Italian
Servings: 6
Calories: 121kcal
Author: Hank Shaw

Serve these ravioli with simple, high-quality butter, fresh ground black pepper and some grated dry cheese. A Tocai Friulano or other big white wine would be an ideal accompaniment.