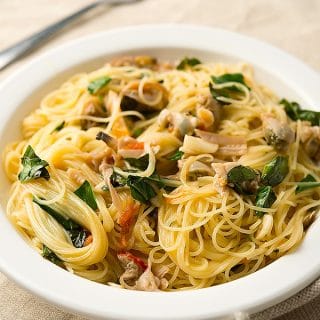 Sometimes I venture out into nature in search of ingredients for a very particular dish. Such was the case when I went out to NorCal’s Tomales Bay looking for littleneck clams. I’d developed a powerful urge for linguine with white clam sauce.

I did not venture out alone. You should know that I am not the only crazy Northern California forager type out there. Actually there are quite a number of us, notably my friend Connie Green and a dude named Kirk Lombard, whom I like to call King of the Space Between Sea and Shore. At the time, Kirk and I had corresponded with each other for years, but alas, had never met.

Kirk lives in San Francisco, and is obsessed with sea life and especially little fish like smelt and herring. He has been on all the TV shows, and has written a wonderful book called Sea Forager’s Guide to the Northern California Coast, which, if you live here, you need to buy.

Kirk is just as geeky and goofy and excitable as I am when it comes to finding new wild foods, and for years we kept trying and trying to do something together. I’d get these wild messages on my phone: “DUDE! Smelt are EPIC right now! Get here!”

Yeah… I live a minimum of two hours from wherever Kirk happens to be bailing the smelt, or herring or whatever. Not gonna happen.

Then I got an email from Kirk about a spot for littleneck clams, which in the West are Leukoma staminea — not the quahog or Eastern littleneck, which happens to have my favorite Latin name: Mercenaria mercenaria. Whatever the species, littlenecks are gold in these parts: Hard to find but easy to dig, delicious, and living in spots that can be easily overfished.

I know this, so was honored that Kirk would show me the spot. Sad for you, dear reader, but you don’t get to know. All I can tell you is that it is somewhere in Tomales, which is a very long bay.

As I pulled into the spot on a foggy dawn along the North Coast, I knew this would be a good meeting: We both drive crappy pickups, and we were both wearing our “office gear” — rubber boots, shabby jeans and frayed sweaters, bucket in one hand and rake in the other.

Kirk was buzzing about this spot. I said little. I am always guarded when I hear people talk like this, and I do my best to shut the hell up if I’ve have great luck in a spot I’m taking someone else to: Nature is a fickle mistress, and what’s here now could be gone tomorrow. I oughta have “you shoulda been here yesterday!” tattooed on my forearm.

But Kirk wasn’t kidding. Littlenecks were everywhere. I literally picked up 21 of my limit of 50 clams right off the rocks. On the surface. Kirk and I just kept looking at each other with silly grins. “Who needs rakes?!” he shouted.

When we finally did rake, it was just stupid. I swear on my mother’s life I dug close to 100 clams out of a space of gravel and sand no larger than a large doormat. More than half were large enough to keep. Insane, just insane. We had our limits in minutes.

What’s more, the number and size of the horseneck clams that were also there — we didn’t dig any of those — were astounding. Like Gen. MacArthur, we shall return… We were sad when it was over, but buoyant by our good luck. I couldn’t have asked for a better first meeting with a guy I am certain to see more of in the future.

Once I had my clams, there was really only one thing to do with them: Make a classic Italian white clam sauce. I am from New Jersey, after all. Kirk, born and raised in New York City, had the same idea.

I’ve adapted my rendition of white clam sauce from Marcella Hazan’s recipe in her classic book Essentials of Classic Italian Cooking, which is to Italian food what Julia Child’s Mastering the Art of French Cooking is to French food. As a New Jersey native, I was surprised to see tomato in Marcella’s white clam sauce. But then it is only one large plum tomato, seeded and diced. More of an accent than the base of a sauce.

This recipe is traditionally made with linguini, and you can by all means use it. I prefer the lighter touch of angel hair or capellini pasta, but honestly? Any pasta will do. There are lots of versions of pasta with white clam sauce, many involving obscene amounts of olive oil and garlic. At old-time "red sauce" places, I've had plates of clam linguini literally swimming in garlic and olive oil. Blech. I use Western littleneck clams for this dish because that's what I have around me. I've also used Manila clams and Eastern littlenecks. Any small, hard-shelled clam works here.
Prep Time45 mins
Cook Time10 mins
Total Time55 mins
Course: Main Course, Pasta
Cuisine: Italian
Keyword: clams, pasta, pasta sauce
Servings: 6 people
Calories: 435kcal
Author: Hank Shaw