What, you may ask, is that? Well, it’s a NoDak thing, and it’s literally a bowl of warmth. Knoephla is actually the term for the dumplings in the soup as much as it is the soup itself; you can also eat knoephla without a soup, sautéed with butter and caramelized onions.

The genesis of my decision to make knoephla soup started with a hunting trip to North Dakota with my friend Tyler Webster, who lives there. I’d had Tyler on my podcast to do an episode about Hungarian partridge, and he said I needed to make the journey out there.

So I did, braving the wilds in the Time of Miss ‘Rona, and we had a blast. Literally. We got lots of both partridges and sharp-tailed grouse. I brought a bunch home to play with in the kitchen, and I ended up smoking several sharpies, using my recipe for smoked pheasant.

Well, when you smoke birds, you tend to slightly undercook the legs and wings, rendering them not so edible. But, if you then take that breast-less carcass and use it as the base of a soup stock, it transforms into something more than wonderful.

I’ve done this with smoke duck, and my smoked duck soup with reibele dumplings is something I’ve pretty proud of. My knoephla soup is like a kicked up version of that. It starts with a broth made from two smoked sharpie carcasses, and goes from there to add all the traditional fixins’, like carrots, celery, and of course the dumplings themselves.

Potatoes are also traditional, although I left them out here. If you want to add potatoes, add 2 or 3 Yukon gold or other waxy potatoes, peeled and diced.

Knoephla, pronounced “nip-flah,” are super easy to make. Flour, an egg, milk, a little salt. Make a dough, roll it into a thin log, slice off little dumplings. Boil either in the soup, or separately, which is what I did. I also added a little rye flour to my knoephla because, well, it makes sense for North Dakota.

Don’t worry if you don’t have a smoked bird carcass lying around. Use the carcass from a roast chicken or any other bird, or just some spare poultry meat you happen to have. I will tell you that this soup is better made with a broth from a smoked or roasted bird, though.

Knoephla soup will keep a few days in the fridge, but be sure to reheat it slowly or the cream could break. Also, if you plan on freezing or pressure canning it, leave out the dairy and add it when you are ready to eat. 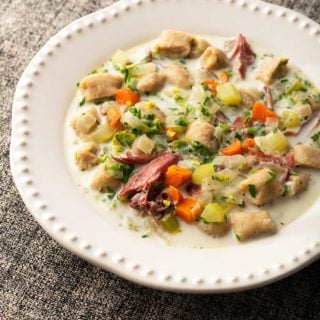