Larb is not unlike Latin American ceviche in that they are both meat (or fish) salads, and that there are versions of it that change from country to country, cook to cook.

Whether the meat is ground or chopped, cooked or raw all depends on who’s making the larb, which you will also see spelled laap, larp or lahb. The dish is, as you might imagine from those other spellings, pronounced more or less like “lap,” although to my ears it’s more like “lop.”

Larb is a common appetizer in Southeast Asia, and my rendition of it happens to be Hmong. We have a fair number of Hmong immigrants here in Northern California, and if you are unfamiliar with this group, know that they fought on our side in the Vietnam War, and after Saigon fell in the 1970s, we allowed thousands of them to migrate here.

In general terms, Hmong food is more rustic than Vietnamese, which makes sense given that they were a rural people. The Hmong also tend to be very good hunters. Knowing this, I was happy to see lots of wild game recipes in the fantastic cookbook Cooking from the Heart: The Hmong Kitchen in America, by Shen Yang, who happens to live here in Sacramento.

This larb recipe is an amalgam of several Hmong recipes: from Yang’s book, my own experiences here in Sacramento, as well as a few other online recipes.

Most of the ingredients are in your local supermarket, except for galangal, a cousin of ginger you can easily find in an Asian market. Use ginger if you can’t find galangal. Larb is really best served fresh, although it will keep a day or so in the fridge.

I used ground javelina that was pretty lean, and you should try to find lean ground meat for your version. A good supermarket alternative would be very lean ground beef, like 10 percent fat or less. This is a great use for 100 percent ground venison, too.

There is one unusual cooking technique for good larb, and that is the ground, toasted rice. It provides a little crunch and heft to an otherwise light salad. Don’t skip it if you can help it, because the ground rice is an integral part of what makes larb larb. 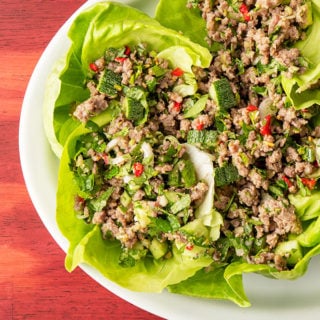