Making sausages using a bird’s neck as a casing was something I “invented” back in 2007, when I was struck by how perfect a goose’s neck would be as a sausage casing. Alas. As the Romans put it, nothing is new under the sun. It seems the French do this around Gascony; I found a reference to the practice in Paula Wolfert’s Cooking of Southwest France.

At least I came by it honestly. I later ate cou farci in France, and it’s really good. Crispy, fatty, not tough or rubbery at all.

Why do this? Well for one, it uses a part of the animal that would otherwise go into the stockpot. But the real reason is because the skin on a bird can be surreally tasty, a combination of crispiness and fat that a regular hog casing cannot provide.

Here’s how you prepare the necks for later when you want to make neck sausage:

When you want to make the sausage, you will need a sharp knife, some fine kitchen twine, a pair of scissors, and, of course, some sausage meat.

On to the cooking. The two keys to cooking cou farci is getting good color on the skin and slow cooking the insides. There are two ways to do this: 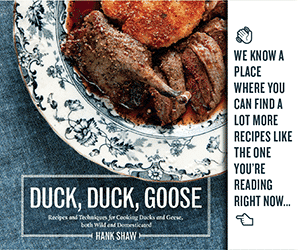 What to stuff your neck sausage with? Well, that’s up to you.

You can stuff them with any regular sausage meat, or you can get as exotic as you desire. I’ve stuffed mine with ground elk, regular pork sausage, and venison sausage, but the cou farci I ate in France was stuffed with Toulouse sausage.

I also like stuffing them with ground giblets of the ducks themselves to make a lovely garlic and sage-infused sausage. It’s a hardcore stuffing, but if you’re willing to use a neck as a casing, why not fill it with seasoned ground giblets? 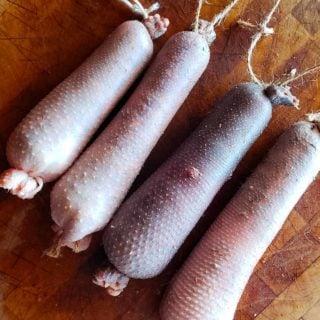 Keep in mind these are directions for getting the casings right and filling them. If you are looking for a good sausage recipe to stuff these with, try my recipe for French Toulouse sausages.
Prep Time45 mins
Cook Time0 mins
Total Time45 mins
Course: Cured Meat
Cuisine: French
Servings: 8 servings
Calories: 172kcal
Author: Hank Shaw