If you don’t love a good piece of fried chicken you are not a real American. And if there is anything more fun to eat than fried chicken, it’s fried quail.

They taste more or less like chicken (especially when fried), and because they are smaller, it’s basically a party when a big bowl of them comes out to the table.

Why? Because there is no way to eat fried quail without just diving in. No forks, knives or other utensils needed. Your fingers are your only tools. Sweet, juicy meat. Salty, spicy, crispy batter. Oh man, you will find yourself scraping the batter off the ribs with your teeth you’ll want it so much.

There are a few ways to go about perfecting your fried quail. First should be to minimize bones. To do this, I will either cut the quail in half or spatchcock them, which is to say cut out the backbones to flatten the birds. Either way, I will pull out the ribs and snip the saber bone — which looks like its name — to make the quail easier to eat.

Another trick will be to let your battered quail rest in the fridge for a while, up to a few hours, even. This helps the batter stick to the quail, so it won’t all come off with your first bite.

You probable don’t want to serve fried quail at a fancy dinner party, unless you want to break the fussiness of the evening and force your friends to get their hands dirty — something I actually wholeheartedly recommend. Just have some extra napkins nearby.

Beware: Holly and I once ate 10 of these little birds by ourselves. So make more than you think you need. A lot more, especially because they are almost as good served the next day as a cold lunch as they are piping hot. 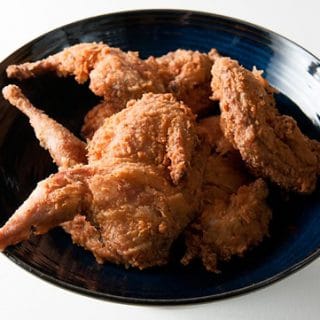 If you are working with real wild quail, I highly recommend you brine them before frying. A simple brine of 1/4 cup kosher salt to 4 cups water will do — the birds are going to get plenty of seasoning later. Submerge your quail in this brine for 4 to 8 hours. Store-bought quail don't need to be brined. As a general rule, 1 quail is an appetizer, 2 a lunch, 4 a good portion for a hearty eater. You can also do this recipe with chukars and Hungarian partridges. (I also have a similar recipe for buttermilk fried rabbit.) Serve with mashed potatoes, cole slaw, cornbread and collard greens.
Prep Time2 hrs
Cook Time30 mins
Total Time2 hrs 30 mins
Course: Appetizer
Cuisine: American
Servings: 4 people
Calories: 738kcal
Author: Hank Shaw