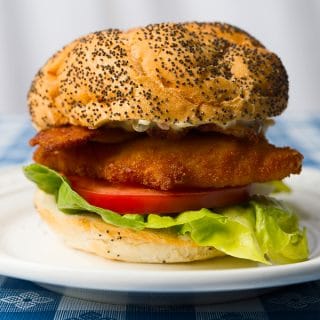 A simple approach is often better, especially with a fish like bass or walleyes or snapper or rockfish, which is what I mostly use. Pacific rockfish, are a catch-all name for a variety of bass-like fish that live in and around, you guessed it, rocks and wrecks along the Pacific coast from Alaska to Baja.

Rockfish are aggressive biters, as are every reef fish I’ve yet encountered. The hardest part about catching rockfish is to a) keep your gear out of the rocks, where it’ll get snagged, and b) keeping the bouncing, head-shaking rockfish from popping off the hook.

Driving home from one particular rock cod trip, I got an urge to make a fish sandwich. You know, a regular ole’ fish sammich, like a Boston Whaler or a Filet-O-Fish… only edible.

What makes a good fried fish sandwich? It starts with the fish, which for me needs to be firm, white and lean. Not a fan of sandwiches made with fillets of salmon or mackerel or the like: Too soft, and too fatty.

Cod, snapper, haddock, walleye or rockfish are ideal. And it needs to be either grilled or fried. Breaded, as in this case, is easier, although a good beer battered, deep-fried fish sandwich is damn tasty, too.

Buns? Anything from good rye bread to hamburger buns to hoagie rolls will do, but I am partial to poppy seed Kaiser rolls. It’s a Jersey thing, I think. Resist the urge for good, crusty bread: It’s so sturdy that the force you need to bite through it will smash your fish fillet.

As far as accompaniments, I gotta have lettuce and tomato, for greenery, crunch, acidity and sweetness. And everything’s better with a slice of bacon.

That leaves the sauce. I’ve had fish sandwiches with everything from ketchup to mustard to horseradish, remoulade, Asian dipping sauces, you name it.

But the Big Daddy of sauces for a fried fish sandwich is tartar sauce. Only I hate store-bought tartar sauces, so I make my own. Too hard? Not so. A tartar sauce is basically mayo with a little mustard and some chopped pickles, plus a random onion product, hot sauce and salt. Easy-peasy.

Check out this sandwich. You know you want to eat it. It’s especially good as a change of pace, or made with leftovers from fried flounder with tartar sauce.

This is how I like my fish sandwiches, but as you know there are endless variations in terms of buns, fish species and how they are prepared, not to mention condiments and accompaniments. I use Pacific rock cod (rockfish) for this, but any lean, white, bass-like fish will do fine. Some alternatives would be black seabass, largemouth or smallmouth bass, lingcod, croaker, walleye, catfish, red drum... you get the point.
Prep Time20 mins
Cook Time20 mins
Total Time40 mins
Course: Main Course
Cuisine: American
Servings: 6 people
Calories: 683kcal
Author: Hank Shaw