Only a fool stops learning.

I’ve always known this, but this old saying came to mind the other day while I was cooking alongside my friend Michael Easton, chef at Il Corvo in Seattle, one of the best pasta restaurants in the nation.

Let me state at the outset that I am good at making pasta, and pasta sauces. I’ve been doing it for decades. But Michael is better. And he showed me some tricks I want to pass along to you.

Michael made a seemingly simple dish for our dinner: A pigeon ragu, sugo di piccione in Italian. He served it with little agnolotti filled with parsnip puree. It was a breathtaking dish. Freshly made pasta, sweet parsnip, and an intensely savory sauce that lingered in your mind, like the chorus of your favorite song.

How can something so simple be so complex? That is the paradox of pasta.

A good pasta dish starts with good pasta, either handmade or of excellent store-bought quality. I made the pasta in the pictures above; it’s a shape called gargati, which means “gullets” in Italian. (If you’ve ever seen an esophagus, you’ll know why.) I made them from a whole wheat pasta using an antique pasta extruder called a torchio. They are chewy, hearty and they hold sauce really, really well.

You need not go to such lengths when you make your squab sugo. A simple homemade pappardelle would be nice, or really any shape that makes you happy — but it does need to be substantial. This is not a gossamer springtime ragu.

And this ragu is something special. I asked Michael how to make it, and his answer took the better part of a full typewritten page. It exposes the complexity of sugo, of ragu, the long-cooked sauces that are to a jar of Prego what a Hyundai is to a Rolls Royce.

He starts with stock, made using other stock. Then slowly cooks that together until all is soft, then smashes it all through a coarse strainer until he has a sauce the consistency of thin gravy. To this he adds finely ground breast meat and giblets from the pigeons, which he browned in lots of butter. The two go together and then they reduce together into a silky, meaty sauce that goes a long way in a bowl.

This is a method I’d never done before, but it is a brilliant way to make a pasta sauce from birds: Carcasses, legs and wings cooked slowly, slowly, slowly, then breasts ground fine and added for the final hour or so.

Michael also likes to use many animals in his stocks. In this case, it was rabbits and pigeons and chickens. I do this a lot, too. You get a better “meat stock” from multiple animals, although I still like single-animal stocks when I want the character of that critter to shine through.

What follows is not Michael’s recipe, it’s mine. But I use his method.

Before you start, a couple caveats: First, this is a rainy Sunday recipe. It’s not quick, and is in fact impossible to make in one day — if you don’t already have stock lying around.

Second, you don’t need pigeons. It occurred to me that this sugo di piccione could easily be sugo d’anatra, although I already have an excellent recipe for duck sugo. Think dark meat animals here: Ducks, geese, sharp-tailed grouse, rails, squirrels, jackrabbits, and yes, even larger animals like deer. If you go the venison route, slow cook neck, shank or shoulder and grind some hind leg meat.

Look at this plate of food one more time. It looks like just a simple plate of pasta. But it is so much more than that. 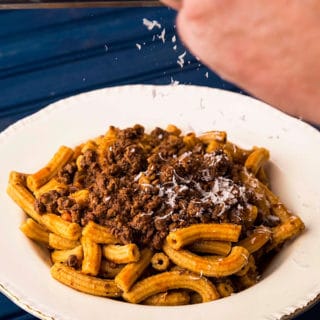 While I use doves and pigeons for this recipe, you can use ducks, geese, grouse (see note below), rails or really any dark meat animal. The key is to long simmer the tough parts of the animal, and finely grind the tender parts to finish it.
Prep Time30 mins
Cook Time6 hrs
Total Time6 hrs 30 mins
Course: Pasta
Cuisine: Italian
Servings: 8 people
Author: Hank Shaw

This is a dark meat recipe, so if you are using grouse, use sharp-tailed grouse, spruce grouse, sage grouse or prairie chickens.
Tried this Recipe? Tag me Today!Mention @HuntGatherCook or tag #HankShaw!