Clamming has always been my first love. With the possible exception of hunting wild onions, clamming has been in my blood longer than any other wild pursuit I do. I can remember my little five-year-old self, chest-deep in the cool waters of Block Island’s Great Salt Pond, digging for quahogs with my feet. I got so good at it I could pick them up with my toes and lift the clams high enough so I could put them in my bucket without ever getting my head wet.

So when I moved within striking distance of the Pacific Coast, I wanted to delve into West Coast clamming in the worst way. But I soon learned that Pacific clamming is, for the most part, very different from what I grew up with. The clams were larger, harder to get, lived in muddier areas — and those areas were few and far between, at least in California.

Looming largest in my mind was Tresus nuttallii, the horseneck clam or gaper. The horseneck clam is to us Californians what the larger geoduck is to Washington state, or what a giant chowder clam is to New England. Living alongside the horseneck is Saxodomus nuttallii, the butter or Washington clam; that’s what I am holding in the picture above. Both make a superior chowder. Sadly, I only know that from restaurants; I’ve struck out every time I’ve searched for them.

Horsenecks and butters are not the tastiest bivalves in the West. I’d say the razor clam, Pismo clam and native littleneck would hold the top spots on the Pacific podium of excellence. But what the larger clams lack in delicacy, they make up for in bulk. A 10-clam limit can net you 2 pounds of pure meat.

There’s something else special about these clams.  Keep in mind that foraging is usually defined as hunting for things that don’t run away. So clams are, for the most part, lumped into foraging and not, say, fishing or hunting. But make no mistake: You hunt for horseneck clams. They can escape you as easily as any deer or duck or largemouth bass.

I learned this Sunday morning — yes, I spent Easter morning on a muddy clam flat. This should not surprise anyone who knows me. We are having some excellent low tides, and my new friend Sol wanted to know if I wanted to head out to Bodega Bay to search for horsenecks and butter clams. Absolutely! This was the chance I’d been waiting for, the opportunity to go clamming with someone with local knowledge.

We arrived at the clam flats right at sunrise. To our surprise there were at least 10 other clammers there before us. Guess the lure of low tide bested the call of the church pew. It was already dead low tide, so we had no time to waste. Every minute the tide would roll in further, so we reckoned we’d have two hours to dig, tops.

That’s the end of the siphon of either a horseneck or butter clam.  Sol’s next pearl of wisdom: That siphon could be more than a foot-and-a-half long. Oh, and the clam on the end of it can bury itself deeper into the ground if it knows you’re coming. So dig fast.

Holy crap! No clam in the East is like this. I’ve never dug more than eight inches into the sand or mud for clams before, even in winter when Eastern quahogs bury themselves deep. OK, then. Here we go.

I soon found an occupied hole. I took a step near it and a geyser of water erupted from its center as the siphon retracted. Game on! I slammed the shovel into the sand beside the hole and dug as fast as I could. Deeper, deeper. No clam. Deeper. No clam. Geez…

“Dig with your hands!” Sol said. “You don’t want to break the shell.” Break the shell? I can’t get near this damn thing, let alone worry about breaking the shell. I clawed at the sand with my hands. Deeper, deeper. Then I felt something. Something firm. Rubbery, and a little leathery. The siphon! I flung myself flat on the sand and grabbed it with my thumb and forefinger. That’s when I realized I was armpit deep in this hole of mine. Or, rather, this hole of the clam’s. My nose was in the sand. I could go no further.

It was a standoff. There was no way I could gain any more leverage on the clam without the hole completely collapsing in on itself. And the clam couldn’t dig itself any deeper because I was holding for dear life onto its siphon. For a long moment we lay there, locked in static combat. Then I did the only thing a higher primate could do, when faced with the stubborn resolve of a mollusk. I let go.

I stood up, panting. God, that was hard! Undaunted, I found another occupied hole. This time I crept softly toward it, shovel at the ready. Deep breath. DIG! I got a full shovel-full away before the clam realized what was happening. I saw the siphon retract, and threw myself after it. Gotchya! This time I had my death grip on the clam’s siphon only about a foot down. I frantically scooped handful after handful of sandy muck with my free hand. I felt the shell. Then the curve around the shell. Leverage! Grunting and gasping, I tugged at the back of the shell, and felt it come free. Success! 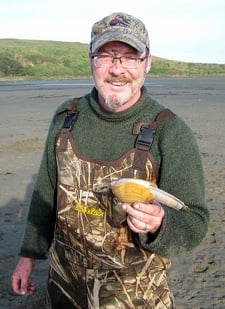 What a rush! Here’s where I admit something that might be sacrilegious to some of you:  I felt WAY more excited about wrenching this nasty-looking clam out of the muddy sandy than I did shooting a wild turkey several days ago. Doing this stirred something deep within my bones. I felt like a kid again.

My forearms throbbed uncontrollably. Both arms were on the edge of cramping and several of my fingernails were torn to the quick. Nevertheless, I was as happy as a, well, clam.

Sol and I were having a blast. We were on a hot patch, with no shortage of clams to be found. But that doesn’t mean we got ’em all. Not by a long shot. And that’s the coolest part about this sort of clamming: Even though I did get my limit of 10 horseneck clams, along with two butter clams, eight other clams bested me. One was so strong it yanked its siphon free from my grip. Sol and I both think this one might have been a geoduck, the elusive King of All Clams.

In the end, we had our limits by 8:15 a.m. We stood over our buckets, exuberant but exhausted from more than an hour of what Sol calls “full contact clamming.” We filled our buckets with clean seawater and a little eelgrass and headed back to the truck. Conversation shifted to chowders and fritters and fried clam strips.

And to when we can get out again.