Caldereta is a slow-cooked stew from Spain, with versions across Latin America and the Philippines. Usually made with beef, I use a venison neck roast. It’s a stick-to-your-ribs, hearty stew.

The name is derived from caldero, which means cauldron, which is what you cook a caldereta in. Not having a cauldron handy, I use a Dutch oven or a slow cooker — this is an ideal slow cooker venison recipe.

Keep in mind this is the Spanish version of the dish, not the one from the Philippines, which seems to be more popular. My rendition is from Andalusia, and is inspired by the excellent books Andalusia by Jose Pizarro and The Foods and Wines of Spain by the late Penelope Casas.

At its core, caldereta is a thick, one-pot meal that is normally eaten with bread. The meat can be anything from lamb to beef to poultry and seafood — there are calderetas of quail and lobster.

Because caldereta cooks for hours, it is an ideal recipe for a venison neck roast, or any cut of meat with a lot of connective tissue. Other good options are shoulder roasts, shanks, and general stew meat from pretty much anything from a deer to an elk to a goat to a sheep or cow.

Like its brothier cousin chilindron, caldereta relies heavily on red peppers, sweet and hot, tomatoes, herbs and red wine. If you don’t want to eat it with bread, add potatoes or other root vegetables.

The only unusual aspect of this recipe is the use of a late-in-the-game seasoning paste called a picada, which in this case is stale bread, almonds and rehydrated red peppers fried in olive oil and ground into a paste. Its addition near the end adds a ton of flavor to the caldereta and thickens it considerably.

Once made, the stew will keep a week in the fridge and freezes well. Quarts of caldereta can also be pressure canned for 80 minutes (follow your pressure canner’s directions) so long as you can it before the picada goes in; that you need to make when you serve it. 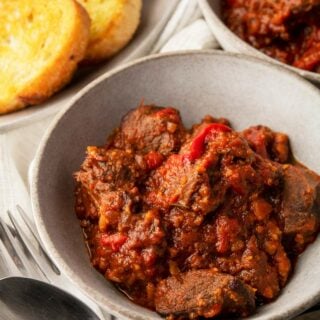 If you are using a slow cooker, drop the stock to a pint, not a quart, because the stew will lose less moisture as it cooks.