It was a long time ago, but I remember my mother clearly: “Ugh, sea robin. Throw it back!” So I did.

We were fishing for fluke, a flatfish like a large flounder or a small halibut, but intermittently we would hook into sea robins; they’re ugly sculpins that “sing” with a staccato series of “urks.” This one was urking all the way as I sailed it into the air and back into the Atlantic. It’s my first memory of “trash fish.”

Ever meet one of those little kids who always asks “why?” That was me. I loved to hear how processes unravel, how things work — and I soon developed a perverse joy in seeing at what point the adults’ knowledge ran dry.

It would always be the same: There’d be a look shot in my direction, a stutter or a hem-haw. Then it would be clear to both of us that they really did not know. One day I asked why sea robins weren’t good to eat. I got that same reaction. Sea robins were trash fish, and that was that.

Only it wasn’t. For more than 35 years I’ve been questioning people’s choices on what is and what is not a good fish to eat. And in that time it’s become apparent that what I call “fish prejudice” is a nearly universal condition. It helps define the difference between “us” and “them” among ethnic, racial or regional groups. Fish prejudice is almost never about flavor. It’s about identity.

Few fish fall into this category more strongly than do sharks, skates and rays. When I was a boy, no one I knew kept any of these creatures. And of the sharks, only mako shark was considered fit to eat — and even then it was a second-class fish.

I distinctly remember adults around me complaining that the swordfish they just ate “must have been mako shark,” as if mako is any less wonderful than sword; it isn’t. And God forbid someone would actually consider eating thresher shark, or dogfish, or any of the various skates or rays we’d occasionally catch. Strictly verboten.

Yet many of those same adults would happily order skate wing in brown butter at a fancy French restaurant. It took me a long time to figure out why. But eating fish outside one’s group is apparently OK if you are in their turf, even if that turf is a restaurant in a strip mall. Think of an American eating skate wing in the 1970s as a cultural adventurer. You’ve probably had the same urge at an “ethnic” restaurant: “Maybe I’ll try the (insert food that is unusual to you here).”

These days those barriers are in tatters. Food television has done a lot to show culinary xenophobes that they just might be missing out on something good. America’s cultural melting pot is another huge factor. It’s growing increasingly rare for someone to stick solely within his or her own group, especially at the table.

But still fish prejudice remains, especially among anglers. And I am not immune. Case in point: Myliobatis californicus, the Pacific bat ray. I’ve caught more than a few of these critters since I moved to California, but had never kept one.

You defeat this problem with sharks by gutting them on the boat, minutes after you catch them. Do this, get the fish on ice, and you will have one of the best-tasting fish in the ocean. I’ve done this with about a dozen different species of shark, too, so it seems pretty widespread. With skates and rays, you only eat the “wings.” With the skates I’d caught back in New York and New Jersey, when you catch one you kill it and slice the wings off right then and there.

So it nagged at me why a bat ray must be bad eating. Something wasn’t clicking. I knew the prejudice was horseshit once I learned that bat rays eat clams. They will occasionally eat other things, like other mollusks and crabs and shrimp, but they are primarily eaters of clams. Remember: You are what you eat, no matter where you live. And every other clam-eating fish I’ve ever caught tasted wonderful. I needed to get over this thing with the bat ray and just eat one.

So as we motored out into the San Francisco Bay last week, I told RJ, “If we catch a bat ray, I want to keep it.” RJ, who I’ve been fishing with many times, tolerates my eccentricities and was game for it. We were fishing for leopard sharks, so there was a good chance we’d connect with a mud marlin.

It was my friend Rick who caught one. As soon as he hooked it, RJ and I knew it was a ray. They are sullen, willful fish that tear line off your reel and stay on the bottom. No head shaking, no frilly runs. Just power. Lots of power. Rick muscled the ray in, however, and it was a nice one, about 10-12 pounds.

Once onboard, RJ whacked the ray and sliced off the wings. He handed them to me and I immediately realized another reason why bat rays are reviled as food: They’re slimy. Skates have skin like sharks: Smooth as silk one way, rough as sandpaper the other. Rays cover themselves in a protective layer of mucousy slime, and slimy fish are almost universally hated by humans. The picture was becoming clearer.

I know how to deal with rays and skates and slimy things, so filleting this bat ray was no biggie.

Start with the slime. Skates don’t have this issue, but rays do. You can remove it in one of two ways: Get a handful of coarse salt and scrub the skin with it in the sink, or just scrub the skin with a scrub brush, also in the sink. It will remind you of that scene in Ghostbusters, but get over it. I will salt the skin when I am leaving it on for poaching, and simply scrub it when I am removing the skin.

If you want a skate or ray wing filleted, you need to slice the meat off the center line of cartilage that runs down the center of the wing. Once you do that you can skin the fillet like any other fish. Lots of people skip this step entirely and poach the wings; once the meat is cooked, the skin and cartilage slips right off.

Skates and rays also have a few other oddities you should know about. For starters, unlike most other fish, skates and rays need to be aged in the fridge a couple days. This firms up the meat enough so you can fillet it without it falling apart. What’s more, a skate or ray’s muscle structure is weird: It looks like wide-wale corduroy. The “grain” of the skate wing all radiates out from where the center of the skate once was.

Skate or ray wings should be brined. The brine draws out any stray smell of ammonia or urea that might be in the wing. A properly handled wing will not have this smell at all, but brining also seasons the meat and helps keep it tender when you cook it. Skate wings, which have no fat in them, are notorious for being dry. If you want, add a little vinegar to the brine, too.

Once you’re prepped your wings, cook them in one of a few ways — dusted in flour and sauteed, deep-fried, or poached. All are ideal. Skate or ray wing will not hold up on a grill, and I don’t like them baked or broiled. But that’s just me.

The classic recipe for skate wings is that French method, sauteed in brown butter and served with capers. So I did that with the bat ray. I have to admit that all along the way, from the deck of the boat to meat on the fork, I was hyper-aware of anything that might be “off” or smelly or unpleasant about this fish. But all along the way, the bat ray proved to be just like a regular skate wing.

I cut some with my fork and looked at it. A little darker than the Atlantic skates I’m used to. Weirdly, it looked a lot like chicken thigh; same color and texture, only a lot softer. I took a bite. Tender like flounder or sole, meaty like a striped bass, and absolutely free of any bad aroma or flavor. It was just like a skate wing. Only it was a bat ray.

My head had told me it was going to be like this, but I’d fallen prey to the universal disdain for this fish. Peer pressure had, for years, trumped what I knew in my heart to be so. I am glad I was wrong. And the next time I hook up with a mud marlin, you can be damn sure he’s coming over the rail. 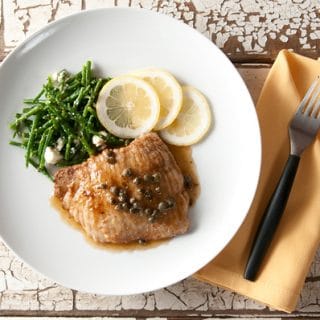 Rays and skates are interchangeable in the kitchen. "Skate wing" is a term of art in the seafood world; you never know whether you're eating skate or ray. But if you get them yourself, rays are slimy, while skates have smooth skin. Some people like their skate wings on the bone, with the cartilage left in. That's fine, just move it aside on the plate once you eaten it. This is a very simple recipe, so use the finest ingredients you can get: The best butter, the best vinegar, the smallest capers. It makes a difference.
Prep Time15 mins
Cook Time15 mins
Total Time30 mins
Course: Main Course
Cuisine: French
Servings: 4 people
Calories: 171kcal
Author: Hank Shaw