This Creole turtle soup recipe has a pretty funny backstory, and since the recipe is easy to make with regular supermarket ingredients — except for the turtle, obviously — I’ll tell it to you.

It all started some years ago with a knock at the front door. It sounded urgent. Normally I’d answer it, but at that moment I was plucking geese. No position to greet polite society. “Holly, can you get that?”

Holly answered the door. It was the mailman. I couldn’t hear everything they were saying, but he appeared to have a large box in hand that he very much wanted to get rid of.

“Hey Hank,” Holly shouted into the kitchen. “Um… were you expecting anything… bloody?”

Not at the moment. The mailman knows me well enough to understand what I do and that I occasionally get care packages full of exotic protein. My first thought was my dad, who once sent me whole king salmon from the Pacific Northwest. But I’d told him to stop doing that, considering that I catch more than I can possibly eat every year now. “Open it up!”

Norm and Joe are my friends from northeast Ohio. Trappers both, and hosts of the radio show Inside the Great Outdoors. It all came flooding back. When my book tour took me to Cleveland, I’d spent some time jawing with Norm and Joe (I stayed at Joe’s house) and well, we might have had a few beers and got talking about turtles.

Turtles are delicious, but are notoriously hard to clean, so I was thankful that Norm had cleaned this one for me. Usually cleaning a snapping turtle involves axes and wire cutters and boiling water and generally a lot of effort. This turtle was a bruiser, too: I weighed the meat at just over 3 pounds — enough for two meals!

I love turtle soup for two reasons: First, it’s just damn tasty. There are several classic ways to make it, and we’ll get to that in a moment, but turtle meat tastes like a cool combination of chicken thigh, clam and pork.

I know, weird, right? The reason is because turtle meat is all over the map, with at least four different textures and colors coming from the same turtle, depending on what part you’re talking about. The second reason I love turtle soup is because it is an American classic.

When the great captains of industry had banquets back in the late 1800s, terrapin soup would always be on the menu next to roast canvasback with fried hominy. Unfortunately, market hunters did such damage to the terrapin population that recreational hunting seasons on them only reopened recently. I’ve never eaten terrapin, which is a smallish turtle that’s reported to be very, very tasty.

But I have eaten snapping turtle. And that’s what Norm had mailed me.

Snapper soup, as it’s called in a lot of places, is just as classic as terrapin soup, but it’s more rustic. It’s still popular among a certain set in Pennsylvania, Ohio, Maryland and its environs.

If you travel farther south, however, you will find my favorite version: Creole turtle soup. Well, to be honest, I like all turtle soups (the Chinese do some cool things with turtle, too) but this one is the most accessible to turtle newbies here in North America.

Creole turtle soup is a standard on New Orleans menus, and everyone has a different version.

One thing to look for is for diced or pulled meat, not ground: You can hide your lack of turtle in the grinder. Finishing the soup with sherry is de rigeur, and the result is a silky, spicy soup kinda-sorta like a gumbo, but with more tomato. It also typically has some chopped hard-boiled eggs in it, which is a nod to the old days, when they’d include any eggs they found inside the turtle in the soup.

I can hear you thinking: “Well Hank, this is all well and good and I am sure this soup is awesome, but where in hell can I find turtle?”

Guilty. Turtle meat is very tough to come by, but I’ve seen it in lots of Asian markets (you can even get live ones there) as well as in some farmers markets in places like Missouri, Ohio and Maryland. And, interestingly, you can also buy it online. 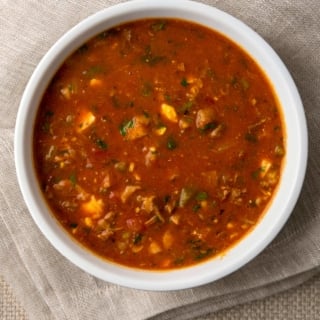 Your hardest task will be to find turtle meat. My first advice would be to cruise the Asian markets in your town, if you have any. Or you can buy snapping turtle meat online. More likely, however, you will be substituting. Alligator is the closest thing to turtle in my experience, and frog legs come pretty close, too. Barring those options, I might use a combination of chicken thighs, pork shoulder and clams. (I've never done it, so you'd have to come up with your own ratio.) You can skip the clams if you think that's too weird, but remember that turtle does have a seafoody taste.