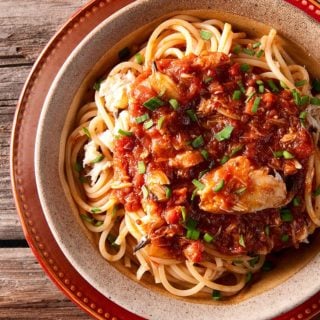 Crab and tomato go together like cats and random things tossed onto the floor. That is to say that crab and any form of tomato play well together, from a simple salad with freshly chopped tomatoes to this spaghetti with crab sauce.

I first had a version of this dish several years ago; my brother-in-law Mark made it with lobster while I was visiting them in Massachusetts.

It is a sauce of two parents: Italians and thrifty Yankees. Mark being both, he made the sauce using just the legs and bodies of the lobsters, parts many people throw away. But Mark knows that plenty of meat lurks within lobster bodies, and he’d patiently pick it out before making this sauce.

As he did so, it occurred to me that there would be no reason why it would not work with crabs, too. After all, crabs and lobsters are cousins.

(I also have a recipe for lobster fra diavolo, which is similar and an Italian American classic.)

So when I returned home to California all those years ago, the first time I brought back some crabs from Bodega Bay I made my own rendition of Mark’s lobster sauce. I’ve made it many times since then, and a version of it appears in my book.

But as with any recipe you do over and over and over again, I’ve tinkered with the original, and, I think, have managed to streamline the recipe even more. In the old version, I had trouble getting all the shell out of the sauce. I’ve fixed that here.

This sauce is insanely good. Good in the way only years of tinkering can do. Sharp, sweet, garlicky, just a little spicy with a strong hit of anise flavor from fennel and ouzo.

It may look like just a regular tomato sauce with bits of crab in it, but it’s not. I assure you. Do yourself a favor and make some shrimp or scallop scampi as an appetizer for this. You won’t be sad you did.

This recipe is a two-step process: Making the sauce base and then the sauce itself. You can make the base a day ahead if you'd like. Any crab will do here, but I use a combination of red crabs, rock crabs and Dungeness crabs. The only tricky ingredient here is ouzo, which is a Greek anise-flavored liquor. Most liquor stores have it, but you can sub in sambuca, raki, Pastis, Pernod or any other anise-flavored liqueur. Still can't find it? Go with brandy; that's what my brother-in-law does.
Prep Time15 mins
Cook Time2 hrs
Total Time2 hrs 15 mins
Course: Main Course, Pasta
Cuisine: Italian
Servings: 6 people
Calories: 494kcal
Author: Hank Shaw

Once you make this sauce, it will last up to 3 days in the fridge before it starts to get funky.