Rare is the day that I mix cheese and seafood, but shrimp mac and cheese is an exception.

These flavors work as well together as the more expensive lobster mac and cheese do: buttery, hearty, savory, with a crunchy breadcrumb crust, bound together in a homemade cheese sauce. And it all comes together in less than an hour.

The taboo against mixing cheese and fish or seafood is largely an Italian one, and I absorbed it growing up in a heavily Italian American-influenced New Jersey. Few other cultures observe this prohibition, and Americans of all stripes love lobster mac and cheese. Well, shrimp mac and cheese is more accessible, less expensive, and almost as good as the luxe original.

I used spot prawns I caught while in Alaska, but really any shrimp will work, as will crawfish, crab and yes, lobster. Shrimp mac is especially good with those little pink boreal shrimp from the northern oceans; those shrimp are also sustainably caught.

The key to any good mac and cheese is the cheese sauce, called a mornay in French cooking. It’s easy to make. You start with a flour-and-butter roux, cook it until it’s a beige, then mix in milk, half-and-half or, in this case, cream. Yes, cream is richer than milk, but with milk you risk it curdling if your pot is too hot. Cream is sturdier. If you do choose milk, it must be whole milk.

You then stir in shredded cheese, little by little, adding more when the previous handful has been incorporated into the sauce. What sort of cheese? I’m partial to a 50-50 mix of freshly grated cheddar and gruyere, plus a little grated pecorino or parmesan. I once used that pre-shredded “Mexican blend” of four cheeses and it was pretty good.

Whatever you use, make it a mix of cheeses, which tastes better.

How much sauce and how thick it is will be your call. I like enough to coat everything, but not so much that my shrimp mac and cheese is swimming in the sauce, the way Kraft mac and cheese turns out. If you want things saucy, add an additional cup of milk (or cream) to the sauce.

Traditional pasta is of course elbow macaroni, but any short pasta is fine; I used cavatappi. Do not mix different pastas, however, because many cook at different rates, and you want your pasta uniformly cooked. Err on the side of undercooking your pasta, since it will be baked, too.

This recipe makes a fair bit of shrimp mac and cheese, so if you have leftovers, reheat them in a microwave, or oven at 350°F until warmed through. It does not freeze well.

Looking for variations? Once fun way to switch things up would be to follow my recipe for green chile mac and cheese, and add shrimp. 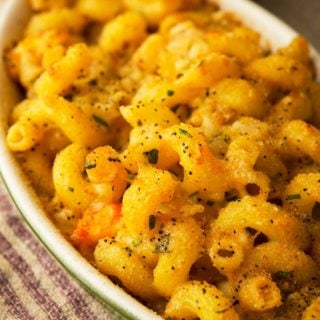 NOTE: If you are using large shrimp, cut them into small pieces, and as I mentioned above, crawfish tails, crab or chopped lobster are all excellent alternatives.