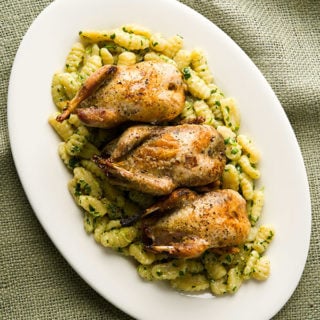 Roast quail is a bedrock skill for any quail hunter or any home cook interested in game birds. And while a pretty plucked quail may look like a tiny chicken, they are different enough to warrant their own recipe.

Quail come in various sizes and flavors, ranging from the mild, soft and tiny coturnix quail, which are the quail most people buy in the store, to the slightly larger and more flavorful bobwhite quail, which can also be bought in some stores, to the similarly sized and even more flavorful Valley, Mearns, Gambel’s or scaled quail — four species that taste very similar — to, finally, the large mountain quail of California’s Sierra Nevada. Mountain quail are a bit darker and gamier than the other quail species, but not so much that you need to cook them differently.

These plucked quail below are all Valley quail; incidentally, the four on the left are dry plucked, the one on the right is scalded. Notice the difference?

I prefer to dry pluck my quail, which requires some finesse and practice; I can pluck eight quail in a little over an hour.

Regardless of species, all quail roast the same. The basic rule for quail is hot and fast. Really hot and really fast. I like about 500°F for about 15 minutes or so. This will cook your little birds nicely, although they will be a little pale — a price to pay for juicy and tender meat. And always start with room temperature birds.

If you really want that pretty brown look, there are two ways to get it. The traditional way is to brown the bird in lots of butter: Butter will brown birds faster than oil and, well, it tastes good.

Another way is to blowtorch the bird after it comes out of the oven, which is what I do because I went and bought myself a Searzall, which is a cool device that allows you to brown foods very fast without getting that weird butane stink on it. Either way works, but if you do it, roast the quail a bit less, like maybe 10 to 12 minutes.

Finally, if you have access to a pizza oven or something else that gets to 600°F or even hotter, you can just blast your quail for about 5 minutes. This is, actually, ideal, although few of us have a pizza oven.

Whatever you do, keep things simple. The flavor of quail is chicken-like, but subtly different. You want to enjoy it, especially if you’ve worked so hard to bring a few birds home with you. 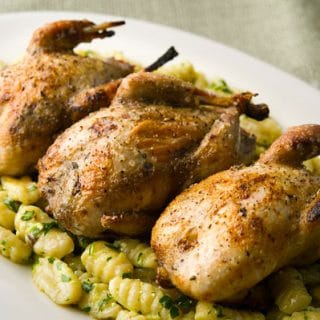 This is a basic roast quail recipe that can serve as a stepping stone for other, fancier recipes. Once you know how to properly roast a quail, you can then play with glazes or marinades -- even though I am not normally a fan of marinades, they will work with quail because the birds are so small.
Prep Time30 mins
Cook Time15 mins
Total Time45 mins
Course: Appetizer, Main Course
Cuisine: American
Servings: 2 people
Calories: 419kcal
Author: Hank Shaw

I include a brining step here if you like brining. If you do brine your quail, they will be more tender and you can cook them a few minutes longer -- but you run the risk of them becoming too salty. Don't brine too long! If you don't brine, the meat will have a nicer texture, but you have less room for error when you roast them.