Pulpo a la gallega. Man, is this good! I can’t tell you when I first ate this Spanish classic, but it was probably sometime in my late teens, and probably at a Spanish restaurant on New Jersey’s Route 22 whose name escapes me now. But I remember it being real-deal Spanish — or at least what I imagined it might be, considering I’ve never been there.

Pulpo a la gallega is basically an octopus salad. Most octo-eating cultures have their versions, and the Spaniards are no different.

You will also find this recipe called pulpo a la feria, because it is common festival, or fair, food in Spain.

And while most octopus salads are summertime fare, pulpo a la gallega works in any weather, likely because Galicia is in the cold, northern part of Spain. I think it’s the paprika and garlic that gives you a warming feeling when you eat it.

(I also have a straight-up grilled octopus recipe.)

Once the octopus is ready, you toss is in olive oil with paprika, a little cayenne, salt and black pepper and squeeze lemon juice or sherry vinegar on it.

Pulpo a la gallega is a perfect tapas dish, party appetizer or hell, just something to chew on with crusty bread while watching football. If you want to make this part of a cool Spanish tapas feast, I’d whip up some salt cod fritters to go alongside it, as well as boquerones and maybe even quail or partridges en escabeche. 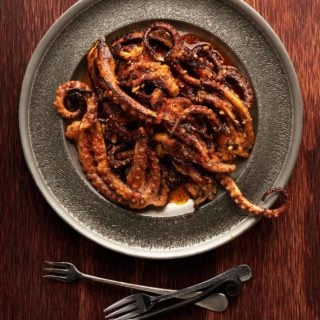 Since this recipe is good either warm or at room temperature, and because it keeps for several days, it is a perfect make-ahead recipe for parties or whatever. I like dipping into a stash of pulpo gallego while watching TV; it's perfect to munch on with good, crusty bread. You'll note that my method of cooking octopus does take a while, but it's the best way I know to concentrate the flavor of octopus while at the same time tenderizing it.
Prep Time20 mins
Cook Time1 hr 30 mins
Total Time1 hr 50 mins
Course: Appetizer, Main Course
Cuisine: Spanish
Servings: 6 people
Calories: 167kcal
Author: Hank Shaw