Traditionally you make peperonata in September, when it’s still hot but you have lots of fresh peppers. Nowadays fresh bell peppers are available all year long, so you can have your peperonata anytime.

When life gives you peppers make peperonata. It is a Sicilian dish of fried peppers and onions, often tossed with some fresh tomatoes and something green, like basil or mint or parsley. It all comes together really fast. In fact, it takes longer to cut all the vegetables than it does to cook the dish. Think of it as an Italian stir-fry.

This is normally a side dish, but I decided to make it a main course. I happened to have some pheasant breasts in the freezer, so I poached them in some pheasant broth I had lying around (stop laughing, I have a strange kitchen, OK?) and shredded the meat into the peperonata. It’s a great meal, even better when it’s hot out.

Cooking the pheasant is easy. Get the quart of stock or broth (chicken is perfectly fine) simmering, drop the skinless pheasant breasts in, cover the pot, turn off the heat and walk away. The carryover heat will cook the pheasant gently, leaving even an old rooster tender.

Obviously you can substitute chicken here, or rabbit, partridge, chukar, quail or turkey. Shrimp, crab or lobster are also excellent options. I do a Greek crab salad that is very similar to this. Or just leave it with no meat and make it vegetarian.

Just remember that the ratio of the meat to the broth is meant for a couple of pheasant breasts — so if you add more meat, you need more broth. Always err on the side of more broth. And yes, you can reuse the broth for something else later. You can even do this poaching in water, too.

Serve your peperonata warm or at room temperature, or even slightly chilled. You want it neither piping hot nor ice cold. 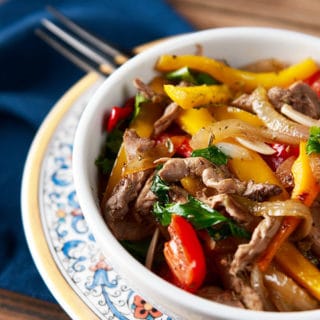 Making a good peperonata requires two things: A variety of peppers and high heat. This is not the peppers-and-onions we all love in Italian cooking; that's a slow-simmered dish. This is blasted over high heat on your hottest burner, with your oven fan going full blast. You want the vegetables to be a little charred on the edges, mostly cooked but still al dente. It really is a stir-fry. As for the peppers, just use various colors. This is supposed to be pretty. Green and red are fine, but it's cooler if you toss in some other colors, too. I also like adding a few hotter peppers, just to give the dish an edge.
Prep Time20 mins
Cook Time20 mins
Total Time40 mins
Course: Salad
Cuisine: Italian
Servings: 4 people
Calories: 373kcal
Author: Hank Shaw