Then, one day, my friend Elise and I decided to remake her recipe for chicken and dumplings so we could get a better photo. One of the side benefits to this is that I get to eat the dish when Elise finishes photographing it. I was a little put off by the gigantic dumplings floating in the broth, but I figured it would make a decent enough lunch. I took a bite.

Wow. So that was what I’d been missing!

Big these dumplings may be, but they were as light as air and nicely coated with a silky chicken broth. The broth itself was the loveliest chicken soup I’d eaten in a long, long time. This wasn’t a Southern horror, like pickled pig’s feet. This was a wonderful dish, homey and layered at the same time. No wonder it was a classic.

Chastened, I decided to adapt Elise’s recipe for wild game. Pheasant is the natural analog for the dish, but I’ve made it with ruffed grouse, too. Partridge, wild turkey, quail or even squirrel or rabbit would work well here, too. Squirrel and dumplings is actually a classic recipe in parts of the South.

This is not a quick and easy dish. It is a dish of love, of time and of patience.

First you simmer the grouse to make a stock, then you pull the meat from the bones to return to the soup later. You strain the stock and rebuild the soup with what is essentially a French veloute, a combination of a flour-and-water roux and the hot stock. New veggies go in, as well as the pulled meat. You finish it off with the dumplings, which really do need the cake flour to be as light as possible.

I now make pheasant and dumplings with some frequency, and I’ve even learned to love wild game versions of chicken fried steak. But I still hate milk gravy. 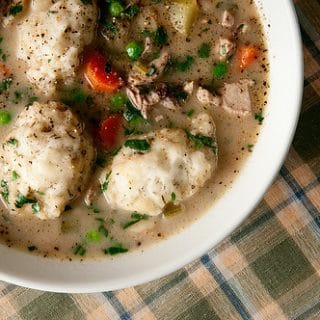 In many parts of the country, chicken and dumplings is the ultimate comfort food. Making it with wild birds is only a matter of increasing the cooking time. Wild birds work for a living, so some can take hours before the meat falls off the bone. But have faith, it will, in time. If you save the giblets, use the heart, gizzard and neck in the broth; don't use the liver, as it will make the broth cloudy and give it a weird taste. If you are wondering about the cake flour in the dumplings, yeah, it matters. It makes the dumplings much lighter and fluffier. If you can't find it, you can use all-purpose. Do not use bread flour.
Prep Time20 mins
Cook Time2 hrs
Total Time2 hrs 20 mins
Course: Soup
Cuisine: American
Servings: 8 people
Calories: 627kcal
Author: Hank Shaw