While pretty much everyone has heard of Swedish meatballs, I am here to cast a vote for their neighbor, Norwegian meatballs, Kjøttkaker.

Norwegian meatballs are a bit larger and flatter than their Swedish cousins, but both use spices from the Silk Road, a relic of the ages when Vikings brought exotic spices back with them from their voyages.

My rendition of this recipe uses ground venison, but you can use really whatever ground meat you have handy. Beef is traditional.

There is a lot going on in this plate of brown. The aforementioned spices, and a brown gravy that is so good you’ll want to lick it off the plate; Holly did. Let me walk you through it.

When I lived in Minnesota, I ate Norwegian meatballs whenever I got the chance, and I developed this recipe after consulting with a ton of Scandinavian cookbooks — although I leaned most heavily on Magnus Nilsson’s The Nordic Cookbook.

First, the meat. No matter what you use, it needs to have some fat, and needs to be ground fine. I went with venison ground through a 4.5 mm die mixed with about 15 percent pork fat. Use that as a rough guide and you’ll be in business.

Second, these are gluten-free meatballs — or at least my version is. I mix the meat with potato starch, which was a tip I picked up from Nilsson. Another tip, this one from me: Use cream, not milk, in the meatballs. Rich? You bet. But so, so good. You can use milk if you want, I won’t hate you. But it is really, really good with cream.

Third, you want to mix Norwegian meatballs well, like a sausage mixture. Some meatballs, like Italian meatballs, are not kneaded a lot. But these are. You want a homogenous, almost bouncy texture.

Now for the gravy. I rely on two special ingredients that put this over the top, Maggi seasoning, and homemade porcini powder. Maggi is a secret ingredient in many brown gravy recipes, and is available in pretty much any supermarket. Porcini powder is just dried porcini mushrooms ground to a powder. You can use other mushrooms, like morels, or you can skip it.

The gravy, by the way, is not gluten free, but you can make it so by subbing more potato starch for the flour; use about a tablespoon at the end.

Serve your Norwegian meatballs with potatoes, of course. Mashed or boiled would be normal. German spätzle would be good, too, as would crusty rye bread.

Oh, and if you still aren’t convinced, I have a fantastic recipe for Swedish meatballs, too, one that’s been in my family for a generation. 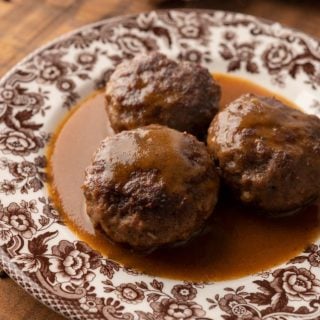 I make these with venison, but any meat will do. Once made, they will keep in the fridge a week, and, if you want to freeze them, fry them and then freeze, reheating them in the gravy.
Prep Time30 mins
Cook Time40 mins
Total Time1 hr 10 mins
Course: Appetizer, Main Course
Cuisine: Scandinavian
Servings: 4 servings
Calories: 538kcal
Author: Hank Shaw