This Guatemalan turkey soup is another of those dishes where everyone’s version is slightly different, and arguments arise from minor differences. Think gumbo, chili, goulash or spaghetti sauce and you get the idea.

It’s called kak’ik in Mayan, which basically means “red and spicy.” It is indeed very red, but it’s not terribly spicy, unless you want it to be. Kak’ik is arguably the national dish of Guatemala, and versions of it have been made long before the Spaniards showed up.

What makes this turkey soup distinctive are a few set ingredients:

Beyond that, you absolutely want to char a lot of your vegetables, either under a broiler or on a comal (or dry cast iron pan). Like the Mexican stew chocolomo, one of my favorites, char is a key flavor here.

And, you want things to simmer a long time. This is an easy soup, but not a quick one.

In Guatemala, kak’ik is served with either white rice or small tamales made with white corn. Just simple tamales, masa only, no filling. Basically it’s the starch that goes with the soup. Interestingly, the Maya, historically, were never too keen on tortillas — that’s an Aztec thing — but they still make a dizzying array of tamales.

I’d make these tamalitos, as small tamales are called, but I reckon why bother when rice is as good and takes a third of the time to cook, let alone prep? Some eat their turkey soup alongside tortillas, too.

Oh, and you want a little bowl of fiery dried or fresh little chiles, too. I suggest chiltepin or chile pequin, which are easy to find. But hot sauce will work just fine. 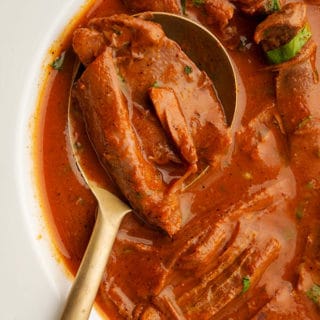 NOTE: You can find achiote paste in Latin markets, and in the "ethnic" section of large supermarkets. If not, look for annatto, which is the main ingredient in achiote paste.