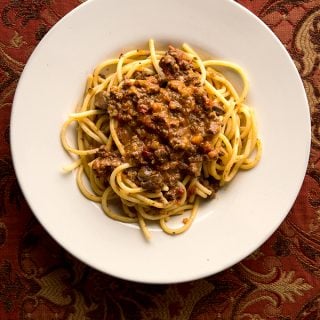 Many years ago, when I first started making Bolognese sauces for pasta, I began hearing of people who put chicken livers in their version. At the time I thought this was nasty — it took me a while to love livers — but I have come around.

As it happens, this is, apparently, a well known variant of the classic Bolognese sauce, which is itself the godfather of our meat sauces here in America.

More important than any claim to authenticity is that this is a great way to use the giblets from your birds in a way that everyone will enjoy. It’s a lot like Cajun dirty rice in that the bits are chopped fine or even ground, so you don’t get big honkin’ globs of liver in your sauce.

Since I am a duck hunter, I get lots of duck giblets, which, for the record, are livers, hearts and gizzards. But chicken giblets are classic, and are a lot easier to buy in the store. The giblets from any bird will work.

If you are a hunter or a farmer, you will need to clean your gizzards, which have nasty pockets of grit in the center of them; they come cleaned in the store. Here how to clean a gizzard. Incidentally, it’ll take a limit or two of ducks to make this sauce.

After that, this is basically a traditional meat sauce, best simmered a long time to let the flavors meld. If you like spaghetti and meat sauce — and if you don’t there’s something wrong with you — you will like this version. Like most sauces and stews, this one is best a day after it’s made. It will keep for a week in the fridge.

It’s a bit more tomatoey than a traditional Bolognese, and you can taste the giblets, but nothing is off-putting about this sauce at all. 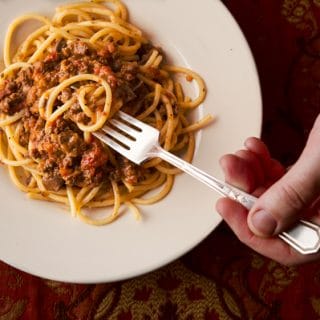 This is a Sunday supper kind of dish, as it's best if it simmers a long time. I love the use of giblets here, and I encourage you to save some for this recipe. Any bird giblets will work, and if you feel unusually squinchy about, say, livers, leave them out -- although they are traditional. You could also use venison liver and heart here, or those from rabbits or really any other animal. And yes, you can use all ground meat. But that would be boring... The mushrooms add a lot. Use them. And don't use fresh, as you want the mushroom soaking water. I used porcini, but morels or any "woodland mix" you buy in the supermarket is fine.
Prep Time30 mins
Cook Time3 hrs
Total Time3 hrs 30 mins
Course: Pasta
Cuisine: Italian
Servings: 8 people
Calories: 276kcal
Author: Hank Shaw

For pasta, spaghetti, tagliatelle, pappardelle, or any substantial, short pasta shape is a good choice. Nothing too light -- vermicelli's too light. Polenta would be another great accompaniment.