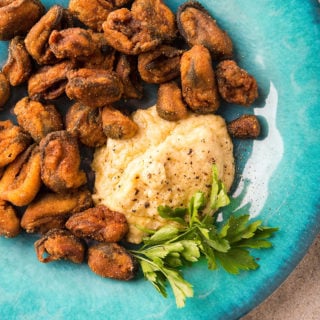 You’ve heard of fried clams of course, as well as fried oysters. But what about fried mussels? Yep, they’re a thing, too.

Mostly you see fried mussels in the cuisines of the Philippines and the Mediterranean, but there is no real reason you couldn’t adapt this recipe, which is Greek, to other cuisines.

I came across this unusual recipe for fried mussels while reading Diane Kochilas’ excellent book The Glorious Foods of Greece: Traditional Recipes from the Islands, Cities, and Villages

. Apparently fried mussels is a thing in Macedonia and Thrace.

They are not something I grew up with. Fried clams are my normal jam. But mussel gathering is easy here in Northern California, and hell, I like fried foods, so why not?

I am glad I tried this. Spicy without being picante, mussels dredged in garlicky skordalia sauce will give you an experience not unlike traditional fried clams in tartar sauce. Same mechanics, different flavors.

There are two ways you can go about getting your mussels out of the shells. You can shuck them raw, but I generally don’t like this method because unlike clams or oysters, mussel shells are thin and brittle. I find they break too often.

Better to steam them in a lidded frying pan, removing each mussel the moment it opens. Doing this keeps the mussels tender and is a lot less messy.

A word on the olive oil you fry the mussels in: It should be cheap, refined olive oil, which has a much higher smoke point than extra virgin. Use the extra virgin oil in the skordalia.

As for the spices, it’s your call. None, some or all of what I recommend. My mix comes from spices I see in Greek cooking, but is not anything “authentic” so far as I know. Whatever you choose to use, don’t put paprika in the mix: Frying it will make the paprika turn bitter. 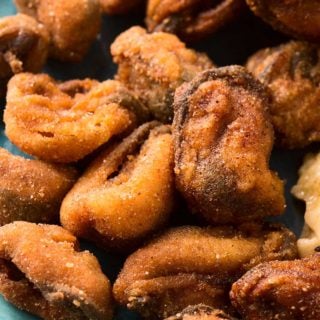 Any edible mussel will work here, store-bought or gathered. You can also use this recipe with clams, too. The skordalia sauce is great with any fried food, and will keep in the fridge for a week or so.
Prep Time25 mins
Cook Time10 mins
Total Time35 mins
Course: Appetizer
Cuisine: Greek
Servings: 4 people
Calories: 634kcal
Author: Hank Shaw

Note that if you are trying to stay gluten-free, you can use chickpea flour for the mussels, and mashed potato instead of the bread for the skordalia.