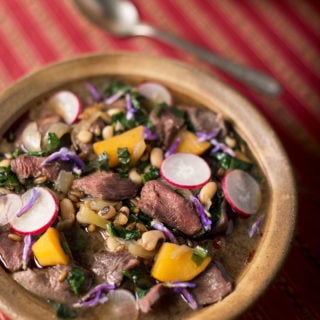 A great venison stew recipe is a beautiful thing. Literally in this case.

Diving into a big bowl of stew is a wonderful way to remember the hunt, and this particular recipe really takes you there — it plays on a common aspect of Eastern deer hunting: The food plot.

You heard right. Food plot. For those of you who don’t know what a food plot is, it is an invention of the whitetail deer hunting industry that basically takes what a whitetail deer loves to eat (and that will promote huge antler growth) and puts it in a big sack o’seed. Landowners plant fields of this stuff to attract deer. They then set up a blind or tree stand and wait for Mr. Big Rack to amble by.

Whether or not this is your style of hunting is besides the point.

What matters here is what’s in those big bags of seed. Look at any of them and you might be surprised to see what you find. Sure, there is clover and chufa — edible, but just barely — but look closer and you will see a smorgasbord of grains, greens roots and beans:

Crazy, eh? Now there are a thousand different dishes you could come up with based on these ingredients, but I decided to develop what has become my  go-to venison stew recipe. Almost everything in this bowl a) can be found in a deer food plot, and b) is easily available even in small, rural supermarkets.

The secret to this venison stew is the sequence of when you put things in it, so you have everything cooked perfectly when you are ready to eat. All stews are like houses: They require a foundation, rooms of flavor and accents of color and texture.

This recipe leans toward Northern European flavors, with rye, rutabagas, greens and a drizzle of roasted pumpkin seed oil at the end. That’s just my choice.

You can take it Mediterranean and use barley or wheat berries, Italian chicories and a good olive oil, or make it Southern with some millet, dandelions and a good roasted peanut oil — mix and match to your liking. That’s the beauty of this stew.

(Here is a Mediterranean venison stew recipe, and here’s a hearty venison soup with leafy greens.)

Nothing in this stew is especially difficult or hard to find, although you really do want some sort of high-quality finishing oil to drizzle on at the end. Other than pumpkin seed oil, other good choices would be walnut oil or a good olive oil.

Be sure to cook the rye separately, as it can take a full hour of boiling to get tender. Rye has its own earthy flavor, but barley, oat groats or wheat berries also work well — and cook faster. Cowpeas are black-eyed peas, but you can use some other variety of cowpea, or any other bean if you’d like.

Once made, this venison stew recipe will keep in the fridge a week, and it can be frozen — although I would leave out all the garnishes when freezing. 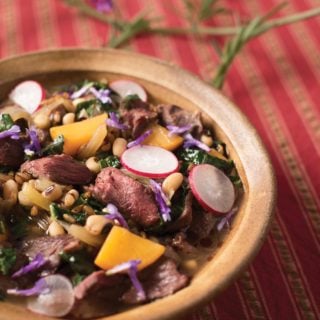 When it comes to the venison, you have two choices: Brown the meat first or cook the stew below a simmer. I cooked the stew below a simmer for the photos, but I also really like the flavor of the meat when it browns first. The tradeoff is that if you brown the meat, it might take an extra 30 minutes or so to get tender.
Prep Time1 hr 30 mins
Cook Time2 hrs
Total Time3 hrs 30 mins
Course: Soup
Cuisine: American
Servings: 8 people
Calories: 176kcal
Author: Hank Shaw