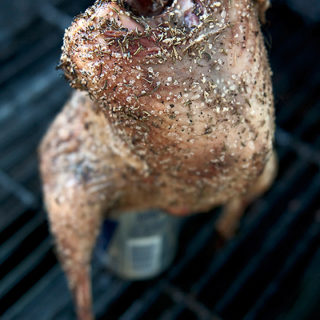 It’s hot. I don’t feel like cooking outside much. And I have lots of wild game in the freezer still. What to do?

BBQ! I’ve been doing a lot of grilling and barbecue over at Simply Recipes with Elise, and nearly everything I do there with domestic meats translates well with wild game. Elise and I played around with a beer can chicken recipe, and it was so good I knew I had to try to make beer can pheasant, using my last remaining whole pheasant.

If you’ve never eaten beer can chicken before, you are missing out. It may be the second greatest thing the NASCAR crowd has brought to American cooking, behind true barbecue itself. Done right, you get a crispy skin, meltingly tender breast meat, and the legs and thigh meat practically falls off the bone. It’s the perfect chicken. But would it work for pheasant?

First problem: Pheasants have slim hips. Too slim to jam a regular beer can up inside them. Hmmm… what sort of can might fit in a pheasant? I got it! Red Bull. Now I detest this stuff — tastes like sweet tarts — so I poured it all out and washed the can well to get rid of the Red Bull taste, then I filled the can up halfway with beer.

I just managed to get the Red Bull can up into the pheasant, as even it was slightly too wide. But it works.

Oiled up and dusted with salt, black pepper and thyme leaves, I closed the lid on Mr. Pheasant and set the burners to keep the temperature up at about 500 degrees for the first 10 minutes or so. I then dropped the heat to roughly 450 for the next 20 minutes, then dropped it again to about 400 degrees for another half-hour.

Turns out a pheasant cooked this way needs only about 45 minutes. I overcooked mine by thinking it would need an hour. But, the skin was crackling crispy, and the legs looked fine. I let the pheasant rest for 10 minutes before cutting into it.

The moment of truth: When I sliced into the breast, it was, miraculously, still juicy! Definitely cooked more than I wanted it to be, but it was not dry at all. All the steam coming out of the can kept the breast moist. Thank you, Red Bull can!

Could this work for other game birds? Maybe. The key is the can. I’d try a Foster’s Lager “oil can” for a wild turkey, and I bet the Red Bull can would work on a large grouse. Not sure who makes cans small enough for partridges or quail, however.

Hunters out there: Do you grill or barbecue your game birds? If so, care to share any tips and tricks? 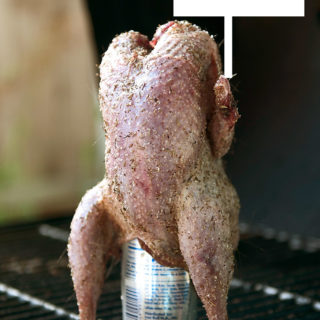 Beer can chicken is one of the best ways I know to roast a chicken, especially in summertime, when you can do this recipe on the grill. But, while you can jam a regular beer can into a pheasant, the birds are generally too small. But a Red Bull can will fit. Fill it halfway with beer.
Prep Time30 mins
Cook Time45 mins
Total Time1 hr 15 mins
Course: Main Course
Cuisine: American
Servings: 4 people
Calories: 620kcal
Author: Hank Shaw

Consider brining your pheasants first, especially if it was a wild bird. Mix 1/4 cup of kosher salt with 4 cups of water and add some seasonings: I like bay leaves, rosemary and cracked black pepper. Submerge the pheasant in this brine for 4 to 8 hours, then drain and let sit in the fridge uncovered the next day — this helps you get a crispy skin. After that, you can do this like a regular beer can chicken.