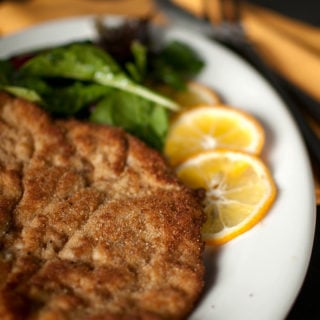 Wiener schnitzel is deceptively simple, but like most such dishes, there is a secret knowledge about how to properly prepare it. Bad weiner schnitzel is cafeteria food, or worse.

At its best, however, this is one of life’s simple joys: The meat is tender and can be cut with a fork. The breading crispy, not greasy, and the squirt of lemon adds that zing the dish needs.

At its core, wiener schnitzel is just a breaded cutlet fried in fat and served simply with lemon, maybe a simple salad, cucumbers or potato salad. It is a blue collar lunch, a slightly more refined rendition of that Southern icon, chicken fried steak.

The trick is in the technique. The cutlet must be very thin, the flour light, the eggs beaten, the breadcrumbs applied with a light hand — and, most importantly, the schnitzel must swim in hot fat. Not oil, fat. Lard is ideal, but clarified butter is fine, as is duck or goose fat. Wiener schnitzel is such a simple recipe that you really ought to use a flavorful fat or you will wonder what all the fuss is about.

If you are in Vienna, wiener schnitzel is made from veal. Period.

Incidentally, if you did not know, the name “wiener schnitzel” has nothing to do with hot dogs or wieners of any other kind… unless you are of course referring to the residents of Vienna, for which this dish is named. It’s actually been called the national dish of Austria, so the Austrians’ love for it goes beyond the capital.

It is very good with veal. But wiener schnitzel is equally good with a pounded pheasant breast, as it is in these pictures. Pounded wild boar cutlets are wonderful, too, as are breasts from partridges or cutlets sliced from wild turkey breasts. It is less successful with dark meats like duck, venison or bear. Still fine, but this dish is really a white meat thing.

If you are not a hunter, make it with veal first and foremost — there is plenty of humanely raised veal out there. Barring that, go for pork loin, then chicken, then turkey.

This recipe is not rocket science. In fact, it’s one of the easiest, fastest, best recipes on the site. It’s a go-to whenever I have lots of pheasant or wild boar around. Just remember, let the schnitzel swim. Use the leftover fat the next morning for your eggs.

Like this recipe? I’m betting you’ll also like my jaegerschnitzel recipe, Same idea, different sauce. And that one is great with red meat. 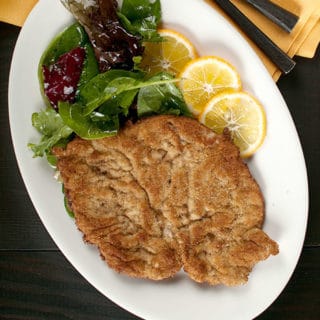 ]If you've never pounded your own cutlets before, read the directions below before you start. It really helps to have a rubber mallet or a meat mallet around, but you can use an empty wine bottle or a small pot. Lemons are a must here, and remember that real wiener schnitzel does not have a sauce.
Prep Time20 mins
Cook Time10 mins
Total Time30 mins
Course: Main Course
Cuisine: German
Servings: 4 people
Calories: 451kcal
Author: Hank Shaw

Serve this with a simple green salad, bread, potato salad or boiled potatoes. And make lots of cutlets: They are awesome eaten cold as a sandwich filling the next day.