This is a recipe for basic, unsmoked bacon, Called ‘green bacon,’ it is an unsmoked lightly cured pork belly made with just salt and spices, no nitrates.

It’s not that I am against nitrates, but sometimes I like a lightly cured, fresher-tasting bacon with my sautéed greens, pasta or beans.

A quick word on “uncured” bacon. It’s a lie. This product is a ruse by manufacturers exploiting a loophole with the USDA that states that if you make cured meat products with celery concentrate, not traditional sodium nitrite, it is somehow not considered cured.

Um… celery concentrate contains at least as much sodium nitrite as the traditional cure, and it is not always regulated — so you could be ingesting more nitrite with a so-called uncured product than with a traditionally cured one.

But I digress. This unsmoked bacon has neither.

I adapted my recipe from Victoria Wise’s American Charcuterie, which is one of my favorite charcuterie books; Wise was one of the first chefs at Chez Panisse in Berkeley back in the early 1970s.

My unsmoked bacon really hinges on juniper berries, which are available in some good supermarkets, or you can order them online. If you can’t find them, rosemary is an OK substitute.

I use an equalization cure here. That means you need a kitchen scale. You measure the slab of pork belly, then measure out 2 percent of that weight in sea or kosher salt. Massage it into the meat and fat, then ideally you vacuum seal it and cure it in the fridge.

Because there is no smoke, no nitrate and such a short cure, unsmoked bacon only lasts about 10 days in the fridge, tightly wrapped. But it freezes fine.

Note: This is, essentially, weakly cured salt pork. If you want to make salt pork double the salt or even bury the pork belly in salt. Salt pork is meant to be very stable over time, and it’s never really eaten on its own; it’s usually added to salt something else, like clam chowder or beans.

If you are looking for other sorts of bacon and bacon-like things, here are all my various bacon recipes for you to browse. 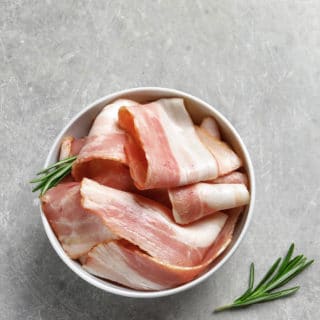 Note that the prep time does not include curing time.