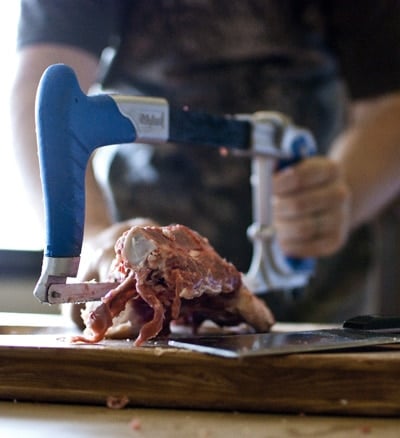 I get asked a lot about the butcher tools I use for all this. Well, here’s what I’ve learned over the years. Keep in mind that this is what works for me. I’d love to hear what other stuff you love to use, as I know there are some other great home (and professional) butchers out there.

I’m not going to go into guns and ammo here, but for the record I shoot a Sako bolt action in .270 and run Nosler trophy grade copper ammo through it.

OK, you have a deer or pig or whatever on the ground: Now what butcher tools will you need?

I’ve used both chamber sealers and suction-style sealers. If you really want to spring for a serious set-up, a chamber sealer is the way to go. I must admit I don’t own one, as good ones cost at least $1000. But I’ve used them many times, and it rocks. Professional grade, the bags are cheap and the seal is stronger than anything else you can buy.

As for a freezer, buy a chest freezer. Period. You’ll need it if you are a deer hunter. Chest freezers can be stored out of the way and they will get a lot colder than your kitchen freezer. And they’re not terribly expensive. I just bought a 7-cubic-foot freezer from Home Depot for $235. 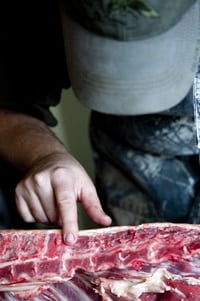 Phew! A lot to cover. But that should get you started. My advice? Build up your collection of butcher tools over time, as some of it can be expensive. Start with a good boning knife and a vacuum sealer and you’re well on your way.