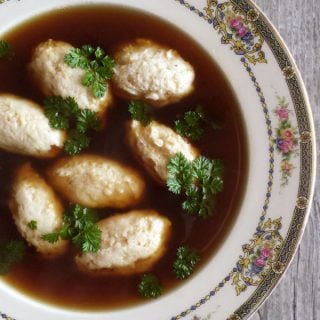 Pike quenelles or dumplings are an ancient preparation in Europe, dating back at least to the Renaissance. It makes perfect sense if you’ve ever worked with pike. They are a bony fish, and require some special handling. (Here’s how to do it.) This recipe modernizes the venerable quenelle and serves it in an unexpected-but-rockin’ broth.

A quenelle (keh-nell) is just a dumpling made with two spoons. My friend Becky has a great video on how to make a quenelle. You can of course just make little balls out of the mashed pike, but these look more refined, and are not hard to make.

Most recipes for fish quenelles would have you serve them in über-rich sauces like Pike Nantua or the actual recipe I got my quenelles from, a great little cookbook called Spoonfuls of Germany: German Regional Cuisine. Most involve heavy cream or cheese or both, and are just impossibly heavy, at least to me.  That said, the Germans do another thing with their myriad dumplings: They serve them in clear broths. I have several such dishes on this site, but this is the first involving fish.

The obvious choice would be a fish broth, but I do that a lot. I do happen to love the combination of seafood or fish with chicken broth — somehow it accentuates the fish itself without making the whole dish fishy — but I wanted to go another route. Mushroom broth is what I came up with, just as a lark, really.

Damn. What a score! This is a dark, rich umami bomb of a broth. You’d think it would overpower the light fish, but they balance. The quenelles tame the broth a bit, and the broth boosts the dumplings, which are pretty subtle.

You’d get a whole different experience if you changed the broth, which I encourage you to do if you make this recipe several times. The dumplings become the canvas to paint on. Served with, say a fish fumet or a carrot consommé, it’d be a very light soup course. This mushroom broth makes it a main course.

Bottom line is that this dumpling recipe can be your go-to not only with pike, but with any bony fish, or with really any fish where you can’t get a nice clean fillet. Perch, panfish, small catfish, carp, you name it. I bet orange dumplings made with salmon would be cool.

You can play with the seasonings, too. Add some minced fresh herbs. Skip the nutmeg and white pepper and go with something zippier. Maybe mustard or freshly grated horseradish? Or even zipper: cayenne or chipotle powder and cilantro. Have fun. Play. Just do yourself a favor and make some fish dumplings someday soon.

Think of this recipe as a guide. You can use pretty much any fish you want, even non-white fish like trout and salmon, and you can change up the broth to suit your taste. A clear fish broth would be lovely, but even regular chicken broth would be good. Of course, this mushroom broth is to-die-for, so if you can assemble the ingredients, by all means. But don't let the broth scare you off. It's the dumplings that are the key here.
Prep Time30 mins
Cook Time20 mins
Total Time50 mins
Course: Soup
Cuisine: French
Servings: 6 people
Calories: 193kcal
Author: Hank Shaw