Artichoke soup is mostly a blended, creamy affair, but I like it better chunky, with interesting things floating in the broth, like meatballs and, well, other thistles.

I’ve always had a thing for thistles. After all, they are one of the symbols of my ancestors, the Scots. Overtly prickly, thistles bluntly decline to declare their goodness to the world.

Most people think them entirely unworthy of notice, let alone the table. But get past that prickly exterior and you will discover depth: sweetness and bitter, warmth and softness, a strange comfort.

Yes, you can eat the crowns, roots and unopened flowers of any thistle, but mostly I am talking about our domesticated thistles, the artichoke and the cardoon.

I have grown them both in my yard for more than a decade, and they’ve naturalized quite nicely. Here, there is a brief moment when both are in season, and that is late April or early May, when it has not yet grown too hot, and when spring rains prevent the inevitable dry desiccation that comes later.

Artichokes most of you have eaten. I use the hearts here, and they are, if you’ve never had one, meaty and rich, with an unusual sweetness about them. Cardoons can be equally meaty — think of them as a cross between an artichoke heart and celery — but have none of the sweetness of their cousin.

Even in the dead of winter, a cardoon is a bit bitter, but in the way arugula or a Belgian endive or winter dandelion greens are. They make a great team.

Both thistles like to be around fat. Classically, you’d pair cardoons with lots of cheese to make a cardoon gratin, but fatty meats are an equally good choice. But what meat?

I happen to prefer both artichokes and cardoons with lighter meats, although artichoke with lamb is very nice. As this is spring, I wanted something lighter, so I dove into my freezer and came out with some ground pheasant from last season. I had shot a few roosters a little too well, so I’d salvaged the meat and ground it with fatty pork. It was practically shouting to become a meatball at some point, and I answered the call with this recipe.

Pheasant meatballs. If you have them ground with enough fat (a few strips of bacon will do), they are every bit as good, if not better, than ground beef or venison. Lighter, better for spring or summer. These are easy-to-make Italian soup meatballs, the sort you’d see in a classic Italian wedding soup. Fun to eat.

This rendition of artichoke soup as a whole has its origin in Abruzzo and Molise, which, roughly speaking, form the “Achilles’ tendon” of the Italian boot. There, it’s normally a dead of winter soup, made with a heartier broth and only cardoons and meatballs. That is absolutely an option if you happen to be reading this in winter.

A brothy pinball game of meaty sweetness from the artichokes, a bite of bracing bitter from the cardoons, browned, savory-herby meatball to balance out that last bite, all bathed in a pretty broth studded with fresh green herbs and the occasional sliver of fresh garlic.

I can pretty much guarantee you this artichoke soup will be a set of flavors unfamiliar to you — and one you will find yourself coming back to again and again, as you develop your own thing for the humble thistle. 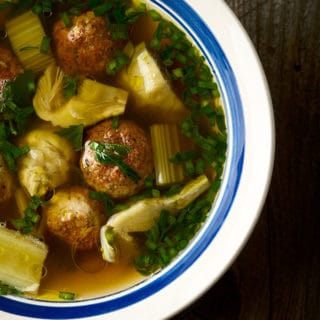 This is one of those widely variable recipes I make that can range from a Sunday project to an easy weeknight meal. I like to use fresh artichoke hearts and cardoons because, well, I grow them and I actually like the process of turning artichokes and prepping cardoons. But the easy alternative is to use pickled or preserved artichokes. As for the cardoons, you can use some celery stalks and get kinda close. Using these substitutions lets you make this soup in fall, when pheasants are in season.

And while I do use pheasant for the meatballs, any white meat will work: Grouse, wild turkey, quail, partridge, and yes, chicken. Fish meatballs would work, too. And to be honest, there isn't any real reason you can't make this a heartier meal by using venison or beef in both the broth and the meat. It'll be a different dish, but still good.
Prep Time30 mins
Cook Time45 mins
Course: Soup
Cuisine: Italian
Servings: 6 people
Calories: 260kcal
Author: Hank Shaw

One thing that will move this recipe from good to great is good, homemade broth. Pheasant, chicken, wild turkey broth -- whatever you choose, it will be better in most cases than anything you can buy. This is especially true if you go the fish route. 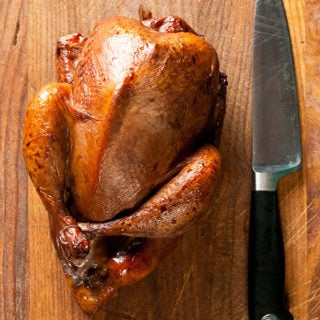 You can find nearly 100 recipes for pheasants and other upland birds here on Hunter Angler Gardener Cook!