Pierogi. Eastern Europe’s contribution to the world’s dumpling party. If you like dumplings, you’ll love pierogi. If you don’t like dumplings, there’s something wrong with you.

It’s believed that the idea of dumplings came from China, through the great Asiatic steppes and into Europe. This may well be true, given that pierogi are a lot like Chinese potstickers. There are records of Pierogi in Poland back to the 1200s, and even back then one of the main fillings was mushrooms.

Now I don’t know if you know that much about Eastern Europeans, but virtually every one I’ve met here in America at the very least likes mushrooms, and most actively pick them, too. I’ve seen platoons of “Russian” — I have no idea where they actually were from, but they always speak a language that sounds like Russian — pickers in the woods, collecting mushrooms that most of us Anglo pickers won’t touch.

I am betting at least some of these shrooms go into homemade pierogi, or piroshki, which is a Russian dumpling a bit more bready, like an empanada.

This pierogi recipe is great to make when you have only a few of each sort of edible mushroom, too, as you’re going to chop them anyway. Got a few morels and a couple dryad’s saddle? Maybe one porcino and a bunch of pine spikes or chanterelles? Go for it.

Mix and match supermarket mushrooms. I like using those “chef’s sampler” packets for pierogi. Or just use common button mushrooms. It’s a dumpling, people. Do what you like.

You can eat them however you want, but I strongly urge you to boil them until they float, then fry them in lots of unsalted butter.

Serve your mushroom pierogi with caramelized onions, a big dollop of sour cream and some dill, washed down with a dark beer. Then you will understand why they’ve been making these things for 800 years. 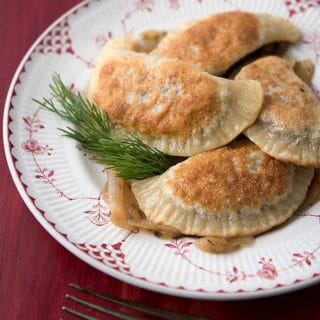 Pierogi are idiosyncratic dumplings. You can fill them with pretty much whatever you want, make them as large or small as you want, alter the dough and either boil or fry them... or both. Mushroom pierogi are a very common thing in Eastern Europe, as the various Slavic nations tend to be serious mushroom eaters. These pierogi are made with fresh porcini and reconstituted black trumpet mushrooms. But you can do this with pretty much any mushroom you'd want to eat. I like having two different kinds for variety, but you could do fresh and dried morels, for example.
Prep Time1 hr 30 mins
Cook Time20 mins
Total Time1 hr 50 mins
Course: Main Course
Cuisine: Polish
Servings: 6 people
Calories: 428kcal
Author: Hank Shaw